Following the success of the 2013 Globe-Trotter Goring Hotel Collection, Globe-Trotter and The Goring came together once again, to create a second edition of luggage in 2015. Now it’s time once again when Globe-Trotter has released a third collaboration with the impeccably English hotel.

The result is a classically stylish, hand-crafted collection in an oxblood vulcanized fiberboard with ivory leather straps, but the real special part comes when opening the trunks.

The luggage is lined with blue damask silk, the same material that was used in the interior of HM Queen Alexandra’s State Coach and also used in several of the suites in the Goring hotel. 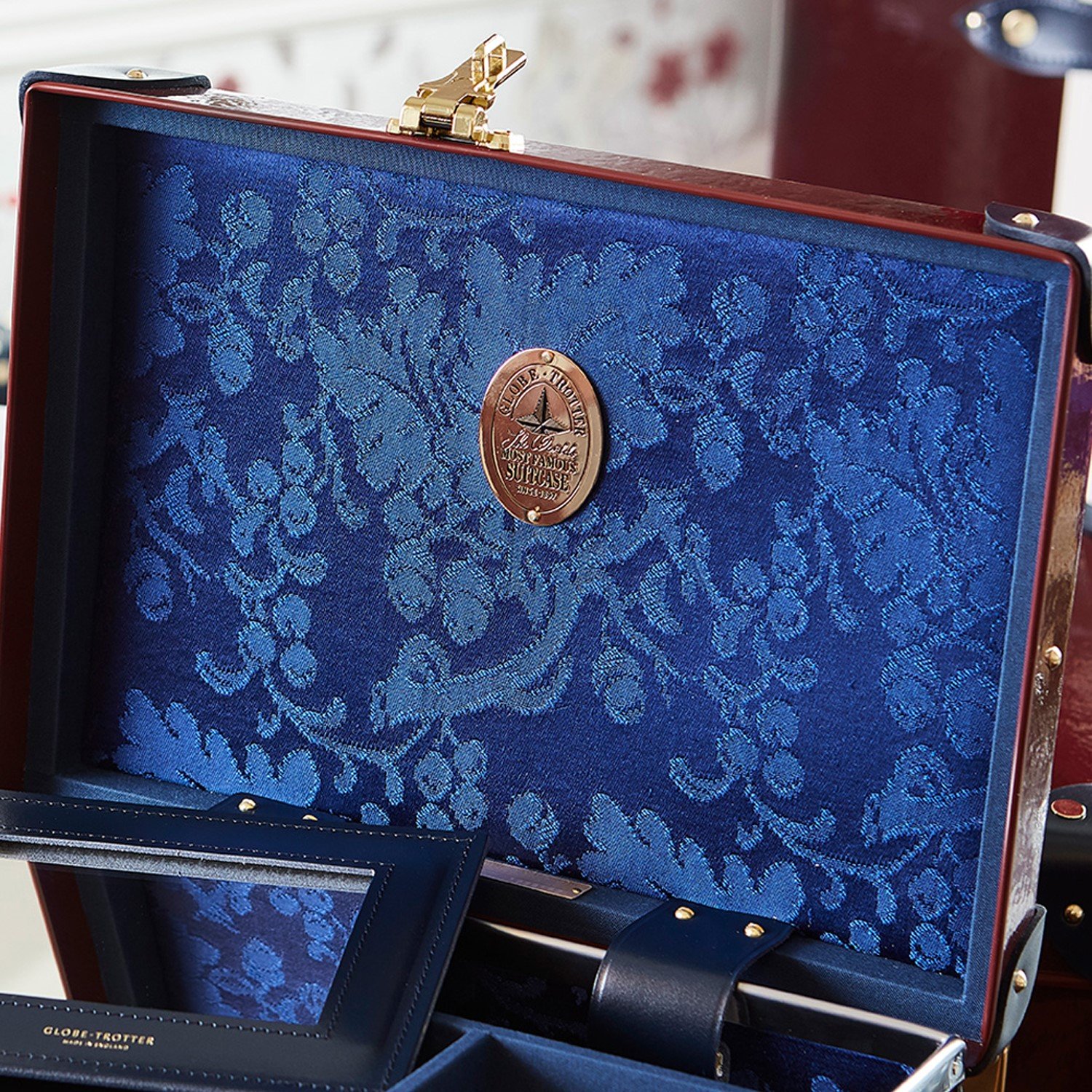 The Goring was opened by Otto Goring in 1910. It is now the only five star luxury hotel in London that is owned and run by the family that built it. Jeremy Goring is the fourth Goring to run The Goring since his great-grandfather opened it. Deep in the heart of Belgravia, just behind Buckingham Palace, The Goring is within strolling distance of the Royal Parks and the best shops, theatres and galleries in town.

The Goring completed a top-to-toe renovation just in time for its 105th birthday on 2 March 2015. Contemporary design and innovation now combine seamlessly with the charm and elegance of British heritage.

Above all, The Goring reflects one family’s passion for quality – whose members have prided themselves on providing comfort, good food and drink and faultless, individual service, for over a hundred years. In January 2013 The Goring was granted a Royal Warrant of appointment to HM The Queen for Hospitality Services. The Goring is a member of Relais & Châteaux.

Globe-Trotter was founded by Englishman David Nelken in Saxony, Germany, in 1897, but returned to the UK in 1932, where it has remained ever since. Every Globe-Trotter suitcase is made by hand on original Victorian machinery at the Globe-Trotter factory in Hoddesdon, Hertfordshire. The suitcases are formed from a special material called ‘vulcanised fibreboard’, which is 14 layers of specially bonded paper, coloured to specification.

Each case is riveted, lined and leather trimmed by hand, from start to finish. Globe-Trotter has been used over the past 116 years by an enviable client list, including HM Queen Elizabeth II, who purchased Globe-Trotter luggage from Harrods in 1947 for her honeymoon. The Queen still travels with her cases to this day. Other customers include historical figures such as Winston Churchill and Captain Robert Falcon through to modern day style icons such as Kate Moss, Daniel Craig, Dita Von Teese and Sir Terence Conran.

Written By
The Gentleman
More from The Gentleman
The classic white t-shirt has a special place in the history of...
Read More