It is for sure something special with holding a real quality pen as the fountain pen.  The weight and the luxury nib of a fountain pen is conveying a feeling of luxury that is difficult to put into words or pictures.

Although the art of writing has not the same position in today’s society, which makes the pen not used as frequently as before, an elegant pen still has its place – both for spontaneous notes and signatures. There is hardly a more elegant pen for this purpose than a fountain pen with a nib of pure gold.

The predecessor of today’s fountain pen has a long history, whilst today’s fountain pens go back to constructions from the late 1800s and early 1900s. The nib of the pen can be a decisive factor for the writing experience. There are nibs made of steel, silver, gold, and even glass. There are also various ink-filling systems for fountain pens. Today, it is most common with ink cartridges for filling them, whilst other common filling mechanisms are converters and pistons. Previously, as applies to vintage pens, the most common filling system was sac-fillers where a rubber ink sac was compressed and then released in order to produce low pressure inside the sac to allow ink to flow in the sac via the feed.

“My two fingers on a typewriter have never connected with my brain. My hand on a pen does. A fountain pen, of course. Ball-point pens are only good for filling out forms on a plane.”

Some fountain pens are more sought after and have a more classic design than others. On the market, there is a limited number of brands that offer ancient and classic fountain pen models. This is one of the advantages of having the fountain pen as a collecting item. Among these brands, you can find Waterman, Parker, Aurora, Conklin, Sheaffer, Cross and Montblanc.

Collectors are not the only ones liking the fountain pen. This pen has been popular as a writing tool for some of our most famous authors. Mark Twain’s fountain pen of choice was Crescent Filler by the brand Conklin.

Through the invention of the Crescent Filler, Roy Conklin was the first person to succeed in making a really functional self-filling mechanism for fountain pens. The Crescent Filler became a commercial success in 1903 when Conklin was granted a patent for his pen. Through a crescent shaped metal extending from the side of the pen, users could fill the pen with ink by depressing the crescent, which engaged an internal pressure bar and allowed incoming ink to fill a built-in rubber sac in the pen body. To avoid compressing the rubber sac accidently, it was secured with a rubber locking ring.

“I prefer it to ten other fountain pens, because it carries its filler in its own stomach and I cannot mislay even by art or intention. Also, I prefer it because it is a profanity saver; it cannot roll off the desk.”

Unlike many others who thought that the protruding crescent made it difficult to hold the pen comfortable, Mark saw an advantage of the crescent as it ensured that the pen was not rolling off the desk when it was put away. 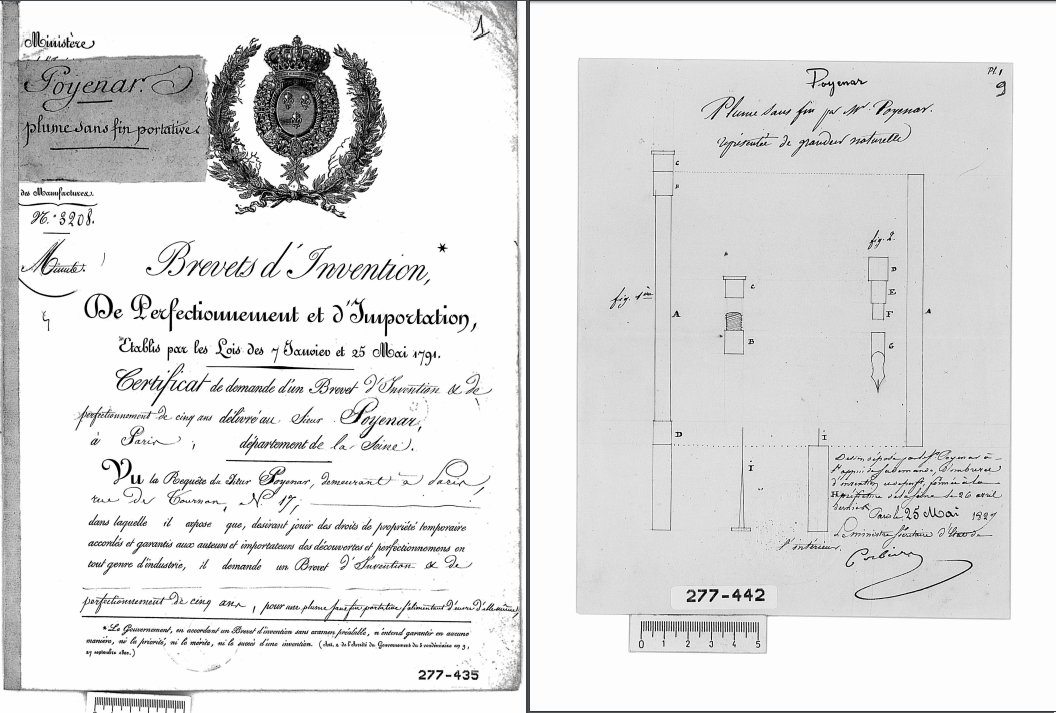 The world’s first patent for a fountain pen was issued by the French government to the Romanian inventor Petrache Poenaru on May 25, 1827. 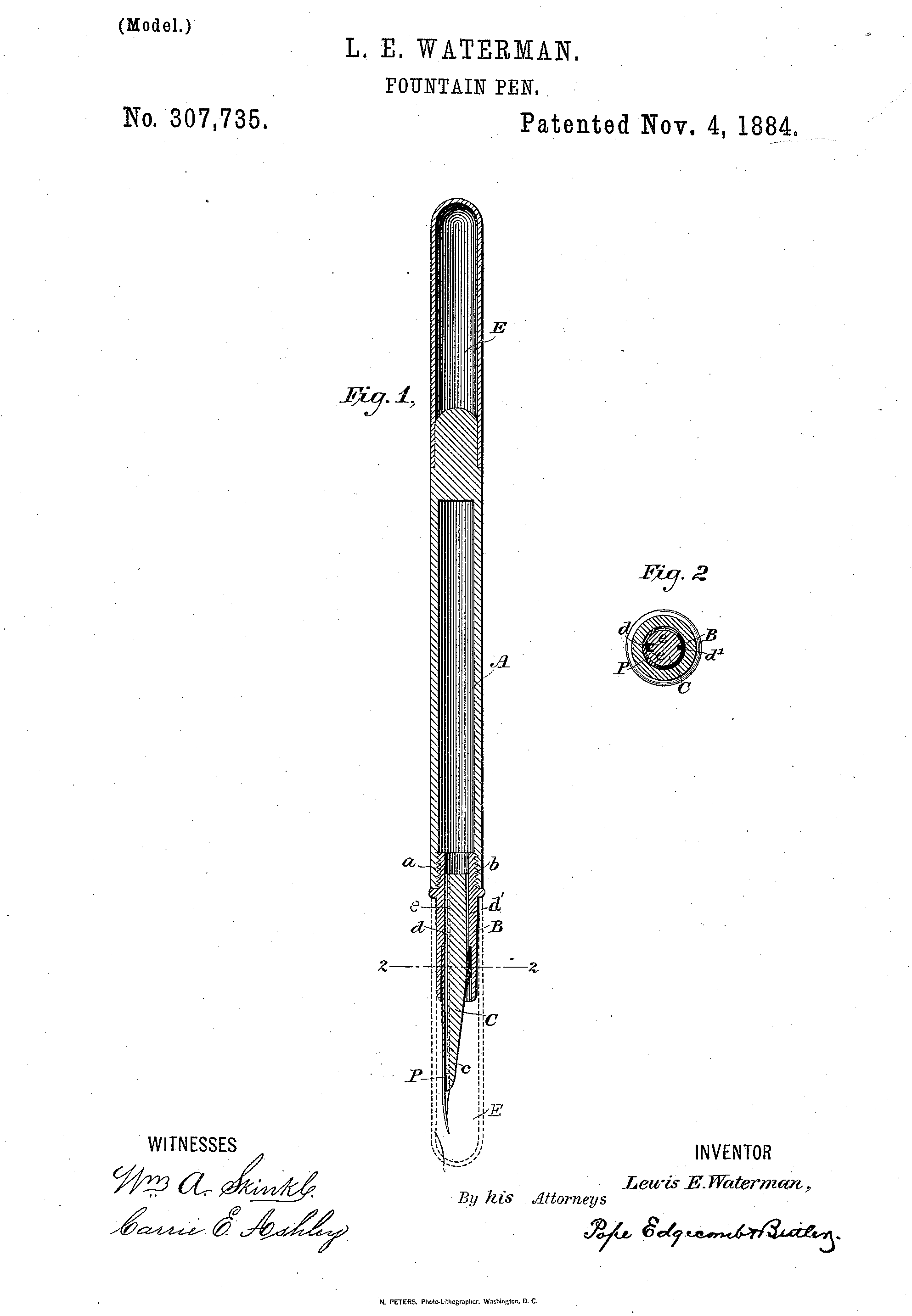 Another very popular brand amongst collectors is the American brand Waterman which was established in 1884. The above patent is from founder Lewis E. Waterman, with what was before Conklin’s invention the most common and easiest system to refill a fountain pen – via a pipette directly into the pen body.

Parker is a well-known brand and it is available in many book stores around the country. In the above advertisement, Parker’s variant of a self-filling pen, a so-called Buttonfiller, is presented in the newspaper St. Nicholas in 1915.

Parker Pen Company is an American company founded by George Safford Parker in 1888. The company was founded in Janesville, Wisconsin, and especially in the late 1800s and early 1900s, the company was by far the largest in the world within its field. 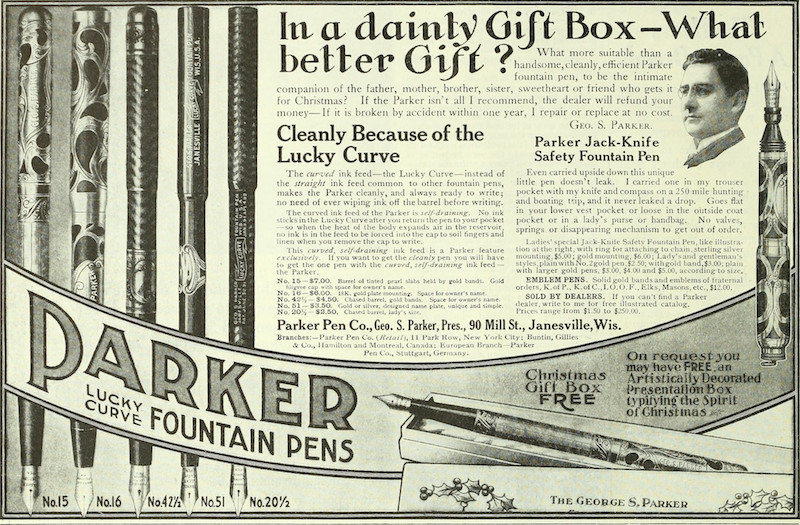 Advertisement from the Saturday Evening Post and their edition from December, 17 1910. In the ad, founder George Safford Parker and some of the predecessors of the Duofold series can be seen, namely the Black Giant which was launched in 1905. George Safford Parker was granted his first patent for a fountain pen in 1889. Among Parker’s famous pens are the Duofold series (launched in 1921), Parker 51 (launched in 1941), Jotter (1954), and Parker Vector (1986). The company is also known for its ink, Quink. 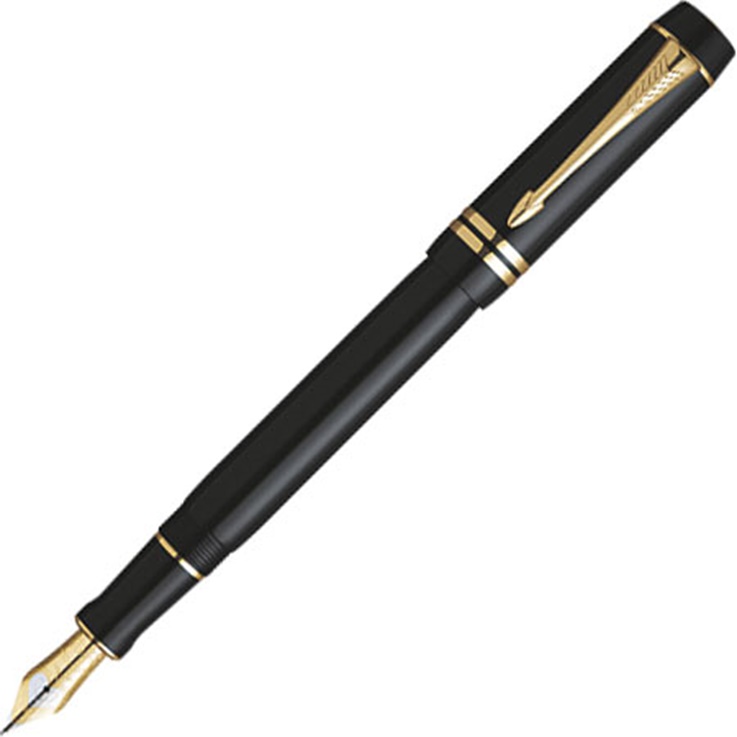 A fountain pen from the Duofold series and their Centennial edition. The mentioned Duofold pen is one of the most legendary among fountain pens. This pen was, among others, the pen that Sir Arthur Conan Doyle used to write some of the later Sherlock Holmes stories. 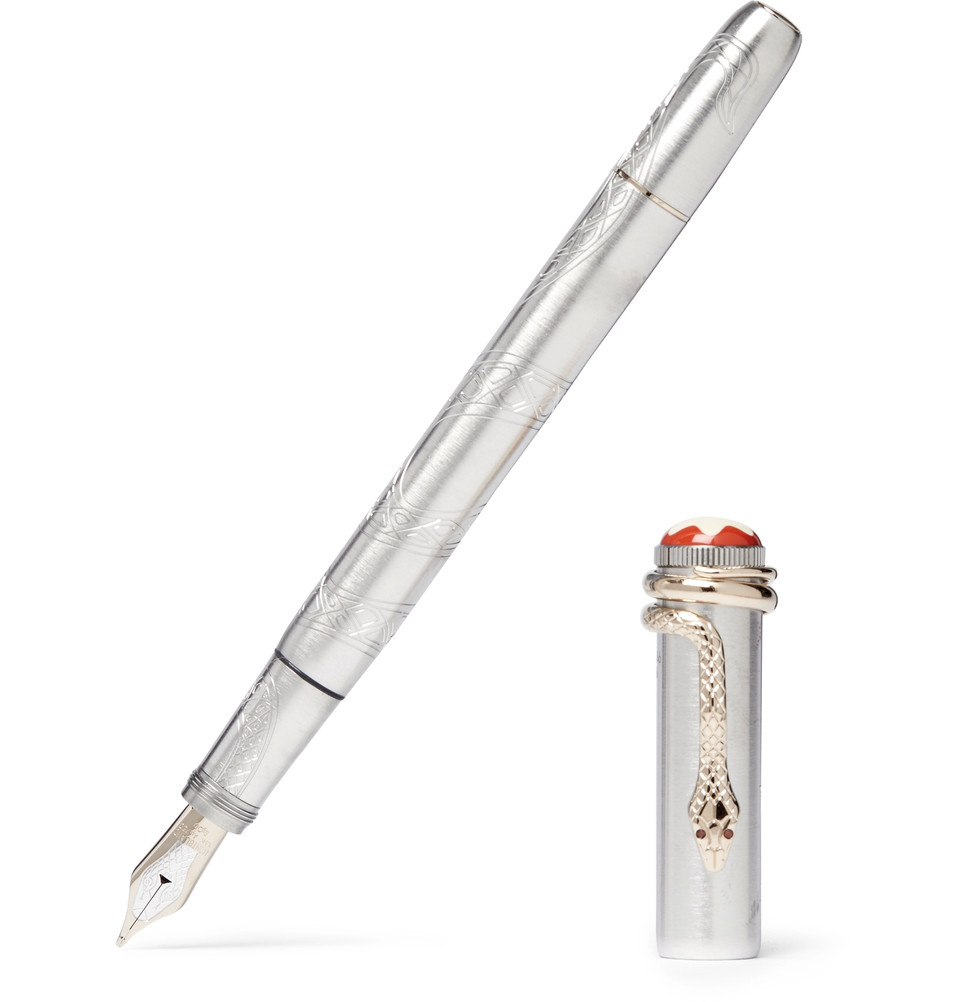 Montblanc is a brand that has been very successful in marketing its luxury products in recent years. Montblanc is a German company which is well recognized brand on the market, much thanks to its pens. Their watches and jewelry are also popular luxury goods.

Engineer August Eberstein started to manufacture fountain pens in Berlin in 1906, and sold them to traders in Hamburg and Berlin. The brand “Montblanc” was registered in 1910 and from 1913 onwards, these pens were adorned with the Montblanc symbol. The symbol identified with Montblanc is a white six-pointed star with rounded edges, representing the snow-covered peak of Mont Blanc. 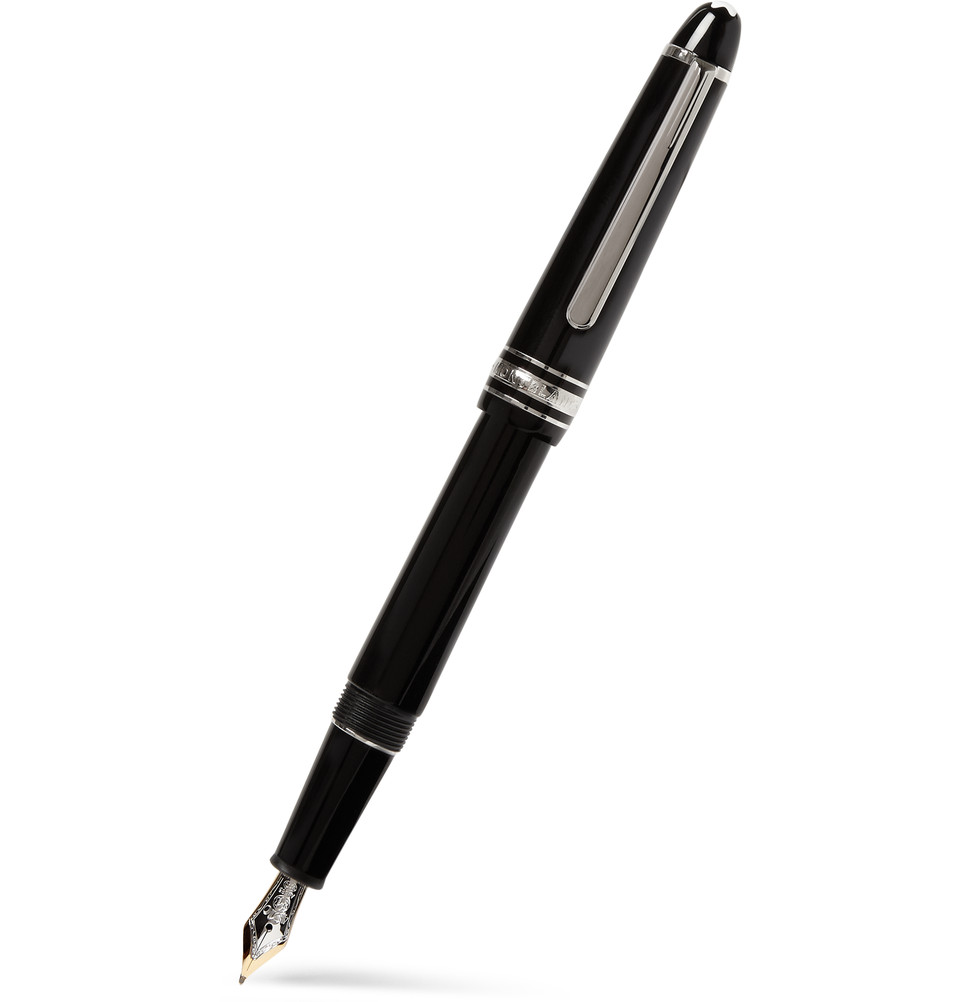 In 1924, Mont Blanc launched its fountain pen Meisterstück, a pen that is a best seller still today. 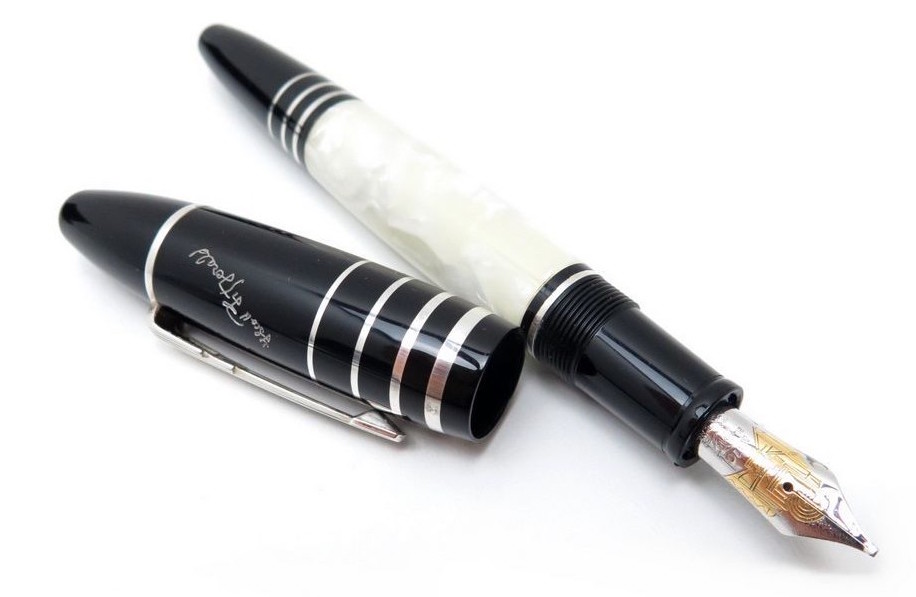 Every year since 1992, Mont Blanc has released a limited edition named Writers Edition, with which Mont Blanc pays tribute to the greatest icons of literature. The above Art Deco style pen celebrates the glamorous days of the 1920s and has been decorated with the signature of F. Scott Fitzgerald. The pen was launched in 2002. Nevertheless, it is not clear if the author himself used Montblanc pens, even though he is writing with a fountain pen in the above picture.

However, what is known for a fact is that Sir Winston Churchill used pens from Montblanc. 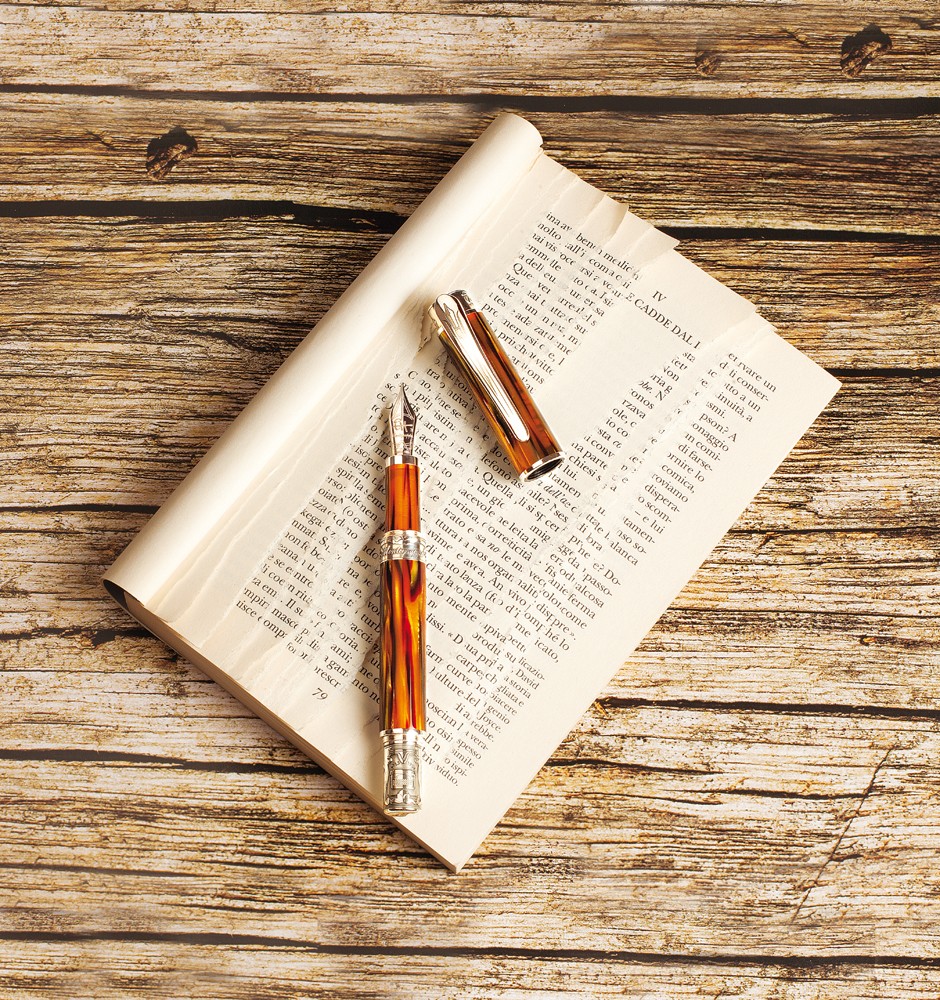 Recently, the Italian producer of luxury pens Montegrappa has launched a collection dedicated to Ernst Hemingway.

During World War 1, Hemingway was stationed near the factory in Bassano del Grappa where the Montegrappa pens were manufactured. This made Hemingway use several models of Montegrappa’s pens during his lifetime.

Montegrappa was established in 1912 and holdes several accessories in the luxury segment in its product portfolio.

Written By
The Gentleman
More from The Gentleman
Brooks Brothers, America’s oldest retailer, has reached its milestone 200-year anniversary. Since...
Read More