In January 2019, the fifth-generation GR Supra – the first global Toyota GAZOO Racing model – makes its world debut at the North American International Auto Show in Detroit, ending years of anticipation and speculation among sports car enthusiasts around the world. Behind the new Supra is a 50+ year lineage of unique Toyota sports and GT cars. Ahead of it awaits the world’s great driving roads, some of which were used to develop this all-new expression of Toyota pure sports car performance.

The 2020 Supra goes on sale in summer of 2019 and will be available in two grades – 3.0 and 3.0 Premium, as well as a Launch Edition which will be based on the 3.0 Premium grade. Driving enthusiasts can look forward to an exhilarating blend of power, precision and agility thanks to a rear-wheel drive design that honors Toyota sports car heritage with its low center of gravity and optimal weight balance. There is a strong connection to Toyota’s 1967 2000 GT and 1993-2002 Supra in both design and mechanical configuration. 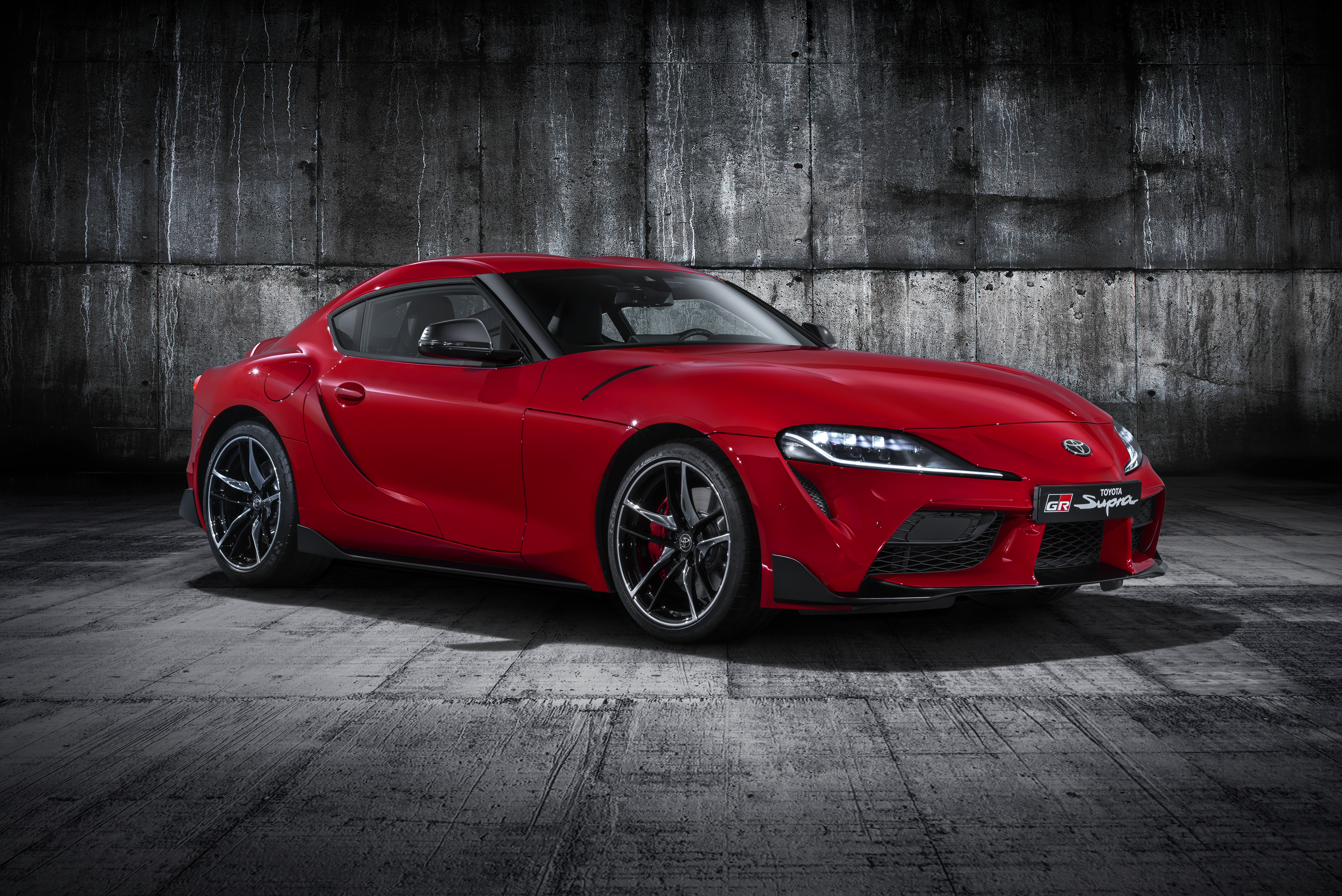 Yet, the 2020 Supra is a fully forward-looking sports car, brimming with a cutting-edge powertrain, chassis and multimedia technology. Like the pinnacle of the previous Supra series, the 2020 model will be powered by a turbocharged inline six-cylinder engine. The new Supra’s 3.0-liter twin-scroll turbo six will produce 335 hp and 365 lb-ft of torque and will be teamed with a quick-shifting 8-speed automatic transmission with paddle shifters. Toyota projects 0-60 mph acceleration in 4.1 seconds, which makes this the quickest Toyota-branded production vehicle to date.

By defining specific performance and handling targets early in development, Toyota GAZOO Racing in Japan, with much input from Toyota Motor North America and Toyota Motor Europe, imbued the Supra with its own driving characteristics. While posting the kind of performance numbers that excite enthusiasts, the 2020 Supra will reward drivers of all skill levels with a thrilling sports car feel, even in everyday driving. 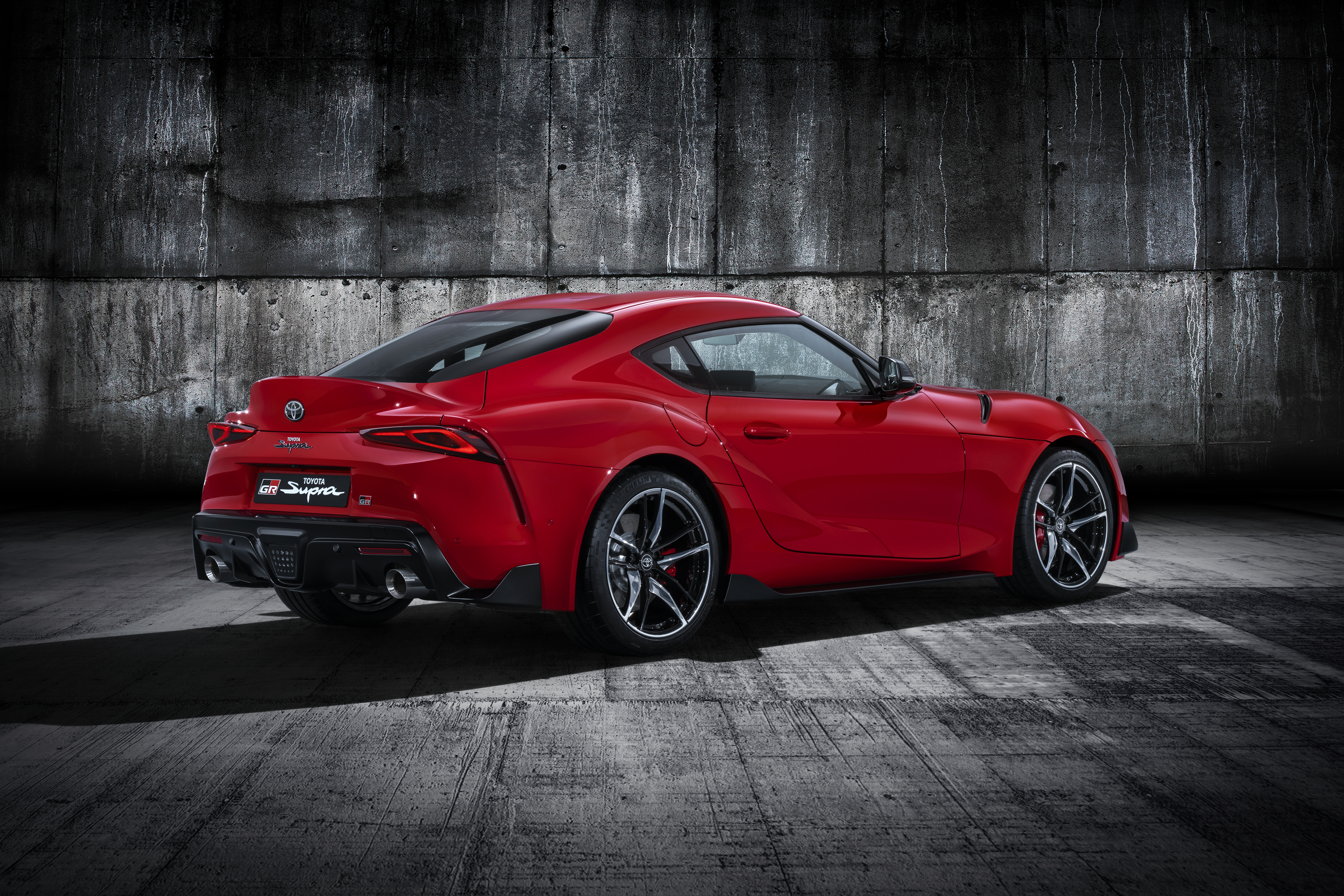 The 2020 Supra embodies its rich lineage at first glance, with a design that shows a particular kinship with the fourth-generation Supra built from 1993-2002, as well as the landmark 1967 Toyota 2000 GT. The resemblance is more than skin deep: the new-generation Supra also shares with those notable models the common traits of a short wheelbase, sophisticated chassis, and high-performance inline-six-cylinder engine.

Toyota offered a glimpse of the new Supra’s design theme in 2014 with the dramatic FT-1 concept car that emerged from Toyota’s Calty design center in California. Supra’s striking exterior design was inspired by the FT-1’s expressive form.

Optimization of the FT-1 design onto the efficient, high-performance packaging of Supra was achieved by condensing the forms, reducing unnecessary elements and further enhancing the dynamic and powerful character. It focuses on core Supra attributes, such as its inline six-cylinder engine and rear drive layout, while enhancing other features, such as stretching the hood to highlight the engine, creating a taut, but spacious two-seat cabin that helps accentuate an ultra-wide stance. The result is a look unique to Supra internally referred to as “Condensed Extreme.” 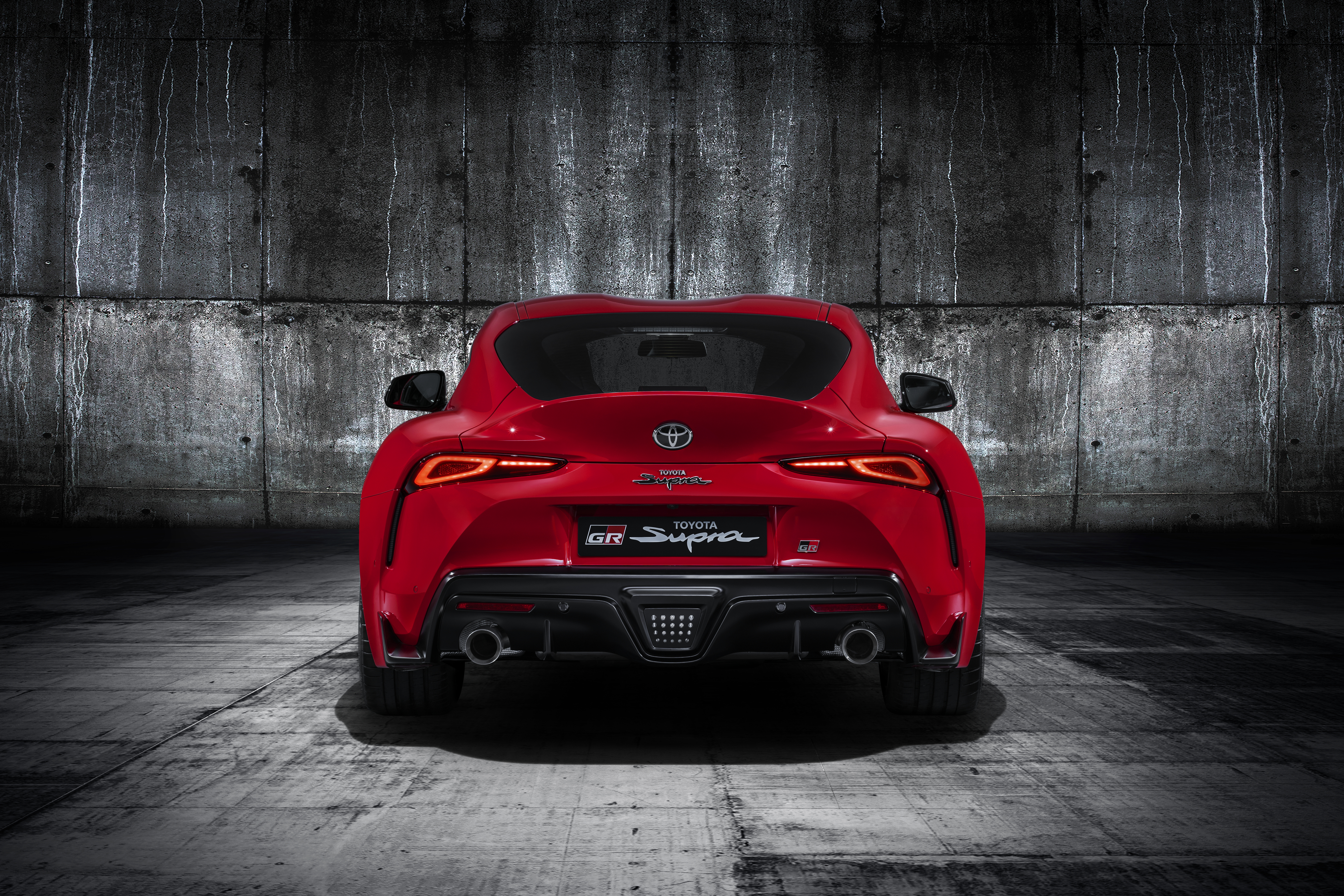 The Supra design delivers a 50:50 weight balance while optimizing front-to-rear aerodynamic balance. Toyota sports car heritage is evident throughout. The double-bubble roof design, for example, recalls the Toyota 2000 GT and it reduces drag by shaving the roof center to reduce the projected frontal area without sacrificing occupant headroom.

The front fascia was inspired by the fourth-generation Supra, yet is even more expressive, with a prominent central grille section flanked by large air intakes. In the rear, the prominent, arching rear integrated spoiler, which helps to suppress aerodynamic lift, pays homage to the tall rear wing that was available on the fourth-gen Supra Turbo. The trapezoidal rear bumper shape conveys a dynamic sense of movement toward the tires.

The six-lens LED headlights integrate both daytime running lamps and turn signal functions to create a distinctive lighting signature for the new Supra. The rear combination lamps feature a simple structure with the turn, tail, and stop functions integrated into the distinctive main ring shape. The backup lamps are LEDs located in the center of the lower bumper. 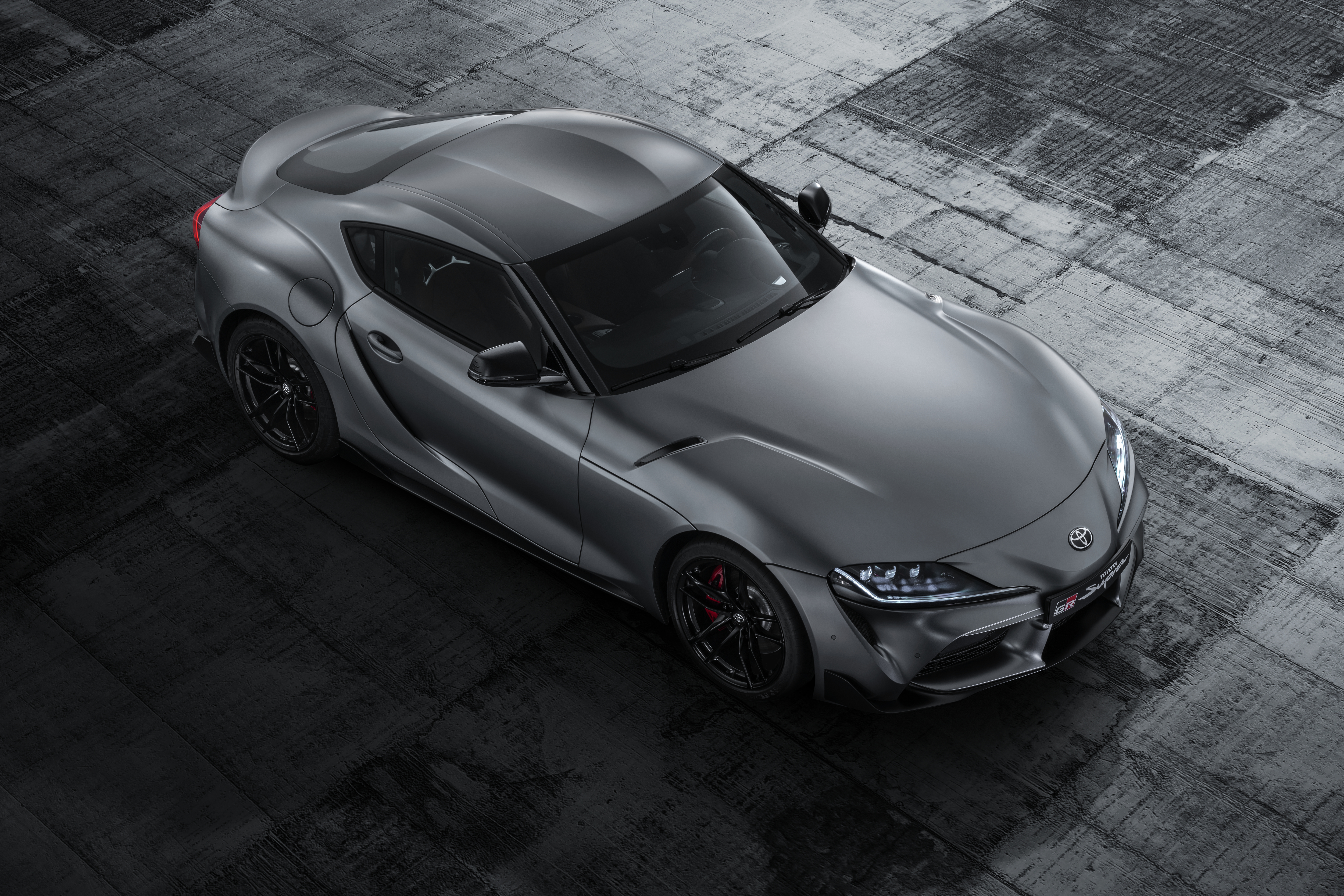 Expressive colors accentuate the emotional connection drivers feel with a high-performance sports car, which is why the 2020 Supra’s paint palette will include bold Renaissance Red 2.0, Nitro Yellow and Downshift Blue. The available Phantom Matte Gray adds a sense of drama to the Supra’s tautly curved surfaces by combining a matte finish and a hint of blue to create a metal-like texture. 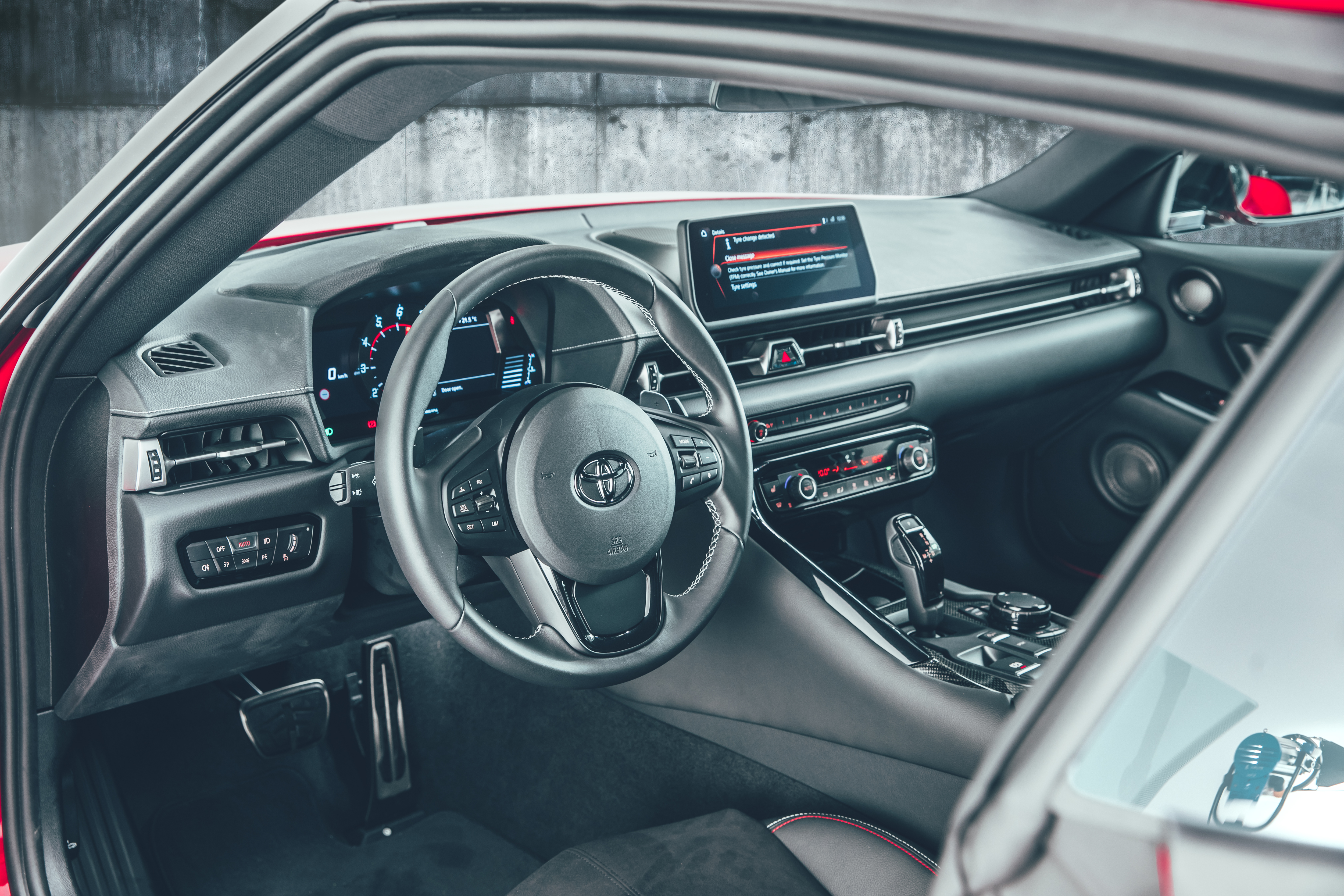 A high-definition color display forms the instrument panel, projecting a large-diameter, three-dimensional meter dial that seems to float over it. The single-meter design consolidates information necessary for performance driving, such as the tachometer and shift-timing indicator, enabling the driver to easily focus on critical control information through the small-diameter steering wheel.

The display’s easy-to-read layout puts multimedia information, including audio and available navigation, on the right side. An available full-color Head-Up Display projects vital driving and navigation information ahead of the driver.

Toyota designers took a fresh approach to designing the center console, giving it an asymmetrical shape that tightly envelops the driver, with a padded pillar that serves as a right leg bolster. The passenger’s side of the console, meanwhile, is open for a roomy feel, yet also features kneepads for bolstering in corners.

The center console tightly groups controls for sports driving. The climate control panel protrudes from the center dash, easing operation without averting eyes from the road.

Toyota designed the 2020 Supra to be both an everyday sports car and an occasional track car. To that end, its sport seats, featuring integrated head restraints, were inspired by racing. The seats use a narrow main section combined with the shoulder bolsters to firmly hold the driver and passenger. The 3.0 Premium grade will feature heated, leather-trimmed seats, while the 3.0 will come with Alcantara power seats with memory.

Supra’s smartly trimmed luggage area, accessed via a lightweight composite hatch, offers capacity for two people to pack for a weekend getaway. The compartment is shaped to accommodate long items, such as a track day toolkit.

In 1967, Toyota stunned the sports car establishment with the limited-production, hand-built 2000 GT. This six-cylinder, two-seat coupe smashed three world records and set 13 new international records for speed and endurance. Just 351 of the 2000 GTs were made, about 60 of those left-hand-drive for export to the U.S.

Nevertheless, many Americans saw the 2000 GT when a specially built roadster version was the automotive star in that year’s James Bond film, You Only Live Twice. Today, 2000 GTs can approach $1 million in collector-car auctions.

Written By
The Gentleman
More from The Gentleman
There are also many classic fragrances on the market that have been...
Read More