As the creative force behind some of the most iconic and innovative releases in the world, Richard Paterson’s passion, expertise and artistry has seen him pioneer the art of maturation and cask finishing which has been instrumental to the success of The Dalmore.

Building on the celebrations surrounding Richard’s 50th anniversary, the limited edition, The Dalmore 50 year old has been meticulously crafted in partnership with four other legendary luxury houses, to serve as a fitting tribute to each year of his illustrious career.

With up to 50 decanters released, which will be hand-filled on order, The Dalmore 50 has been matured in American white oak, Matusalem oloroso sherry casks from the world renowned Gonzalez Byass Bodega and port Colheita pipes from the Douro region of Portugal, before undertaking a final finesse for 50 days in rare champagne casks from Domaine Henri Giraud.

Paterson did not select the champagne cask by chance. Considered to be one of the region’s hidden gems, Domaine Henri Giraud family estate is regularly lauded by experts from around the globe and is one of the only champagne houses to still mature their wines in casks. The casks selected have a unique intensity and aromatic complexity, giving Paterson the final flourish of wood needed to create this exceptional expression.

To hold this unique whisky, the artisans at prestigious French crystal house Baccarat have skilfully created crystal decanters, each of which will be held within a presentation case designed and crafted by the accomplished furniture makers at LINLEY.

Finally, each decanter will be adorned with a solid silver stag, created by silversmiths Hamilton & Inches, holder of The Royal Warrant.

Richard Paterson, Master Distiller at The Dalmore said: “This is a special year for me so I chose to finesse this whisky in a champagne cask, as this magnificent drink is synonymous with celebratory occasions.

“Bringing the champagne together with Matusalem oloroso sherry and port is perhaps the greatest example to date of our ability to innovate in both maturation and cask finishing while preserving the signature flavours of The Dalmore.

“This whisky is exceptional, as are the luxurious and sophisticated finishes applied by the craftsmen at Domaine Henri Giraud, Baccarat, Linley and Hamilton & Inches. They are true masters of their art  and it is a pleasure to have worked with them to bring the 50 year old to life in such a magnificent way.”

Journey of The Dalmore 50 Year Old 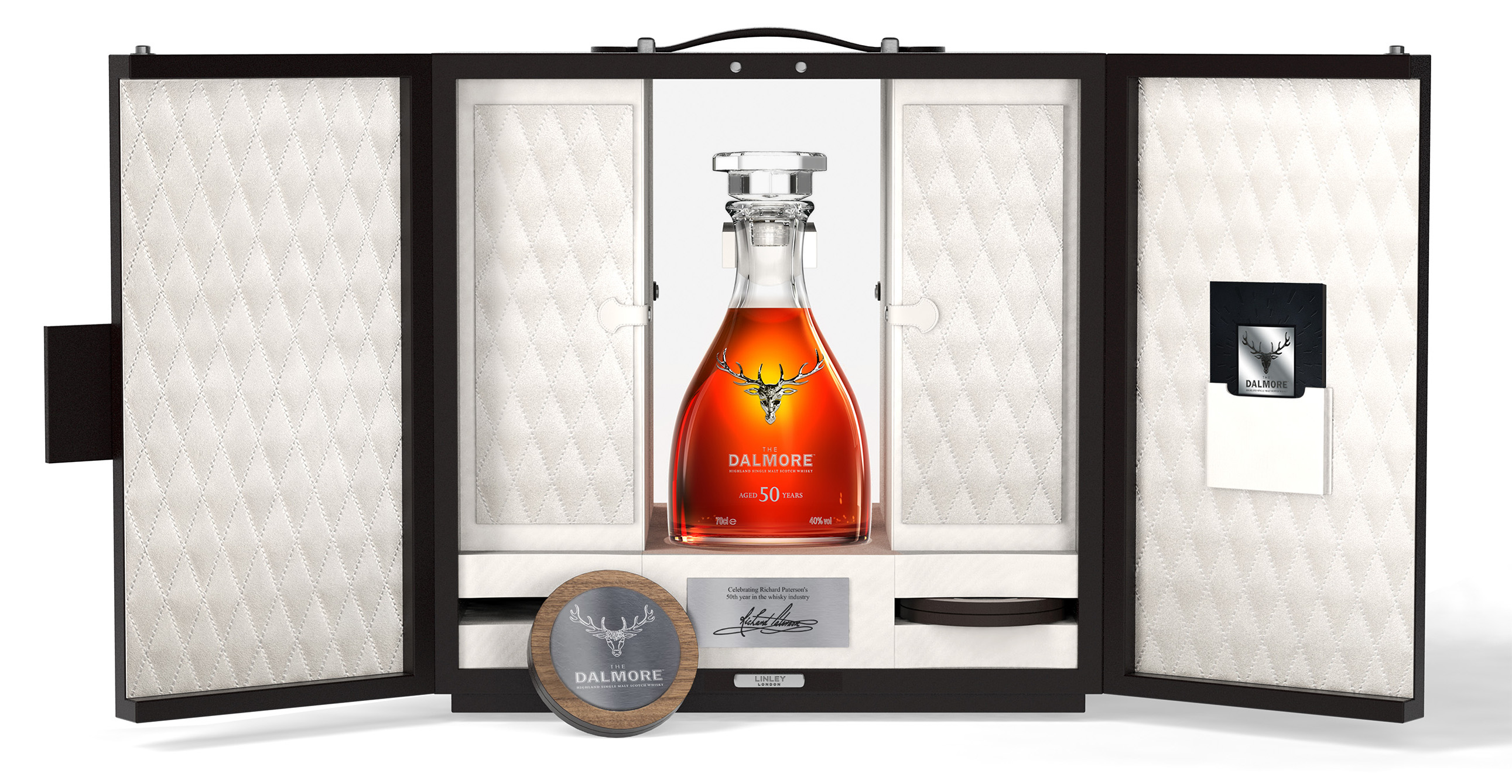 The Dalmore is the definitive luxury malt, since 1839.

Founded by Sir Alexander Matheson, a restless entrepreneur and international businessman, The Dalmore was born with a different purpose, to go above and beyond to create luxurious single malt whisky unlike any other.

An unbroken chain of exceptional whisky makers have been fulfilling Sir Alexander’s vision ever since, pioneering multi cask maturation over 100 years before this was commonly adopted by others in the industry.

Richard Paterson has been Master Distiller at The Dalmore for nearly 50 years.  The whiskies he has created during his tenure have help Richard to achieve global celebrity status.  He is the man who, with The Dalmore, created the category of super luxury single malt, a category he continues to define to this very day.

The origins of Domaine Henri Giraud date back to 1625. Today, Claude Giraud, the 12th generation of the Giraud-Hémart family, is at the helm and presides over this “Maison de Champagne” (UMC member) whose iconic vintage cuvée is named « Argonne ».

Every year, international experts meet in the Maison’s ‘Ateliers’ to understand the impact of different terroirs and geological composition of the soil of the Argonne forest on the taste and texture of the wines. Salinity, intensity and aromatic complexity of Champagne Henri Giraud make it one of the jewels of excellence of the region.

With only 250,000 bottles produced, including only a few thousands for its vintage cuvées, these Champagnes are now sought after by collectors and fine wine lovers from all corners of the world.

Baccarat is the oldest and greatest crystal manufacture in the world. Created in 1764 by permission of King Louis XV to this day it keeps its entire production in the same village in Lorraine where it first started. For over 250 years it has been the symbol of superb craftsmanship and of French “art de vivre”. The refined precision, the timeless elegance of its production, the continuous service to the royal houses and to the greats of the world have given Baccarat the status of a legend in its own right.

In addition to seducing the celebrities of the world, Baccarat’s designs immortalise the excellence of its savoir faire. This know-how is at the forefront of progress, handed down over the centuries by elite craftsmen and the ultimate emblem of an incomparable heritage. Ranging from iconic lighting to unique tableware and decorative objects, fine jewellery and tailor-made flacons, the brand’s products and tradition of excellence are recognised around the globe.

Hamilton & Inches is Scotland’s luxury jewellery house, with distinctive workshops and an iconic customer showroom in the heart of Edinburgh. With 150 years of heritage, Hamilton & Inches brings the world’s most aspirational brands to life and crafts each gift with prestige and pride. Hamilton & Inches are holders of the Royal Warrant for 120 years, and Silversmiths and Clock Specialists to The Queen.  Established in 1866 by Robert Kirk Inches and his uncle, James Hamilton.

David Linley started LINLEY as a bespoke furniture company in 1985 working on private commissions. From a small workshop on the Kings Road, David and his team would take design briefs and create pieces directly in the workshop. It wasn’t long before the business grew and moved to a larger space on Pimlico Road close to where David’s father, Lord Snowdon, had his photographic studio. Now, as LINLEY has just celebrated its 30th anniversary year, the business has grown to include interior design, fitted cabinetry and kitchens, furniture and gifts and accessories. However, everything is still designed and made in the UK relying on a network of 260 master craftsmen who all share David’s love of handcrafted design and attention to detail.

Written By
The Gentleman
More from The Gentleman
The popularity of tweed is an old story – in 1826 a...
Read More