There was a time when a hat and a walking cane was a natural part of the everyday outfit of a gentleman. Nowadays you don’t see these fashion accessories that often on the streets, regardless of where you are in the world. Of all fashion accessories, the use of a hat has to one of the clearest indicators of the movement to a new era in mens fashion during the 1960s.

Until the 1960s the use of a hat was so natural that very few were questioning it. A refusal to wear a hat was rather a refusal to accept the social norms in the society, while it could be said that there is a reversed view of wearing a hat in today’s society. Nowadays we often hear people using the sentence “the courage to wear a hat” in different situations, since it’s seen as old-fashioned by many.

In other word – the times have changed. Something that also can be noticed when reading old Etiquette Books. In the book American etiquette and rules of politeness by Walter R. Houghton from year 1883, the following is mentioned regarding Street Etiquette:

Salutations in the streets vary with the circumstances. In some cases we simply bow ; in others we bow and touch the hat. Words of greeting may or may not accompany the salutation. Generally, gentlemen should lift the hat from the head in saluting ladies, or men entitled to great respect.

THE FIRST TO BOW.

In this country it is customary for a gentleman to bow and lift his hat to every lady acquaintance whom he meets ; and, if she is well bred, she will return the greeting. The salutations can usually be simultaneous.

In other words, the hat was an important part of the everyday life of a gentleman and knowing the etiquette rules of using a hat was equally important. Here are some of the most common models of hats. 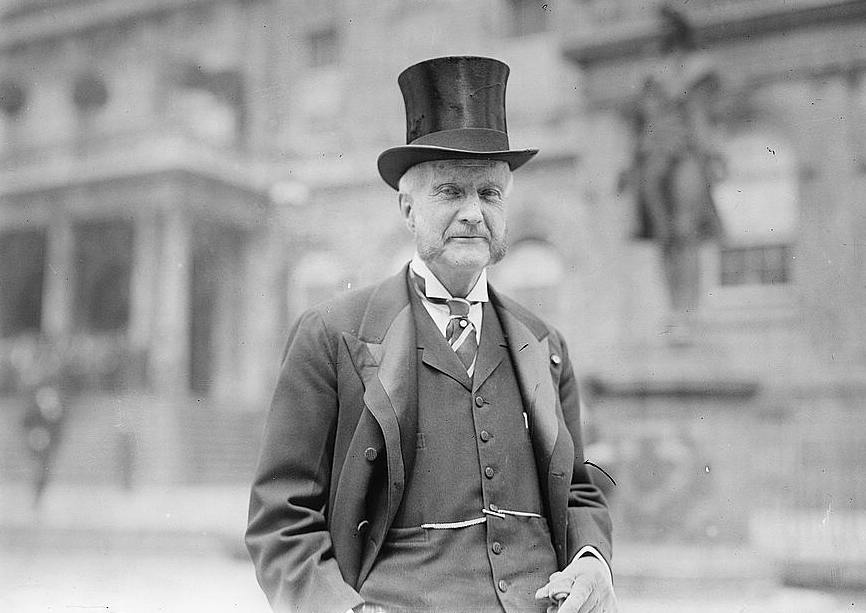 A top hat or cylinder hat, , sometimes also known by the nickname “topper”, is a tall, flat-crowned, broad-brimmed hat, worn by men from the latter part of the 18th to the middle of the 20th century. By the end of World War II, it had become a rarity in ordinary dress, though it continued to be worn in specific instances, such as state funerals, also by those occupying prominent positions in the Bank of England, by certain City stock exchange officials and occasionally when passing between the Law Courts and Lincoln’s Inn, London by judges of the Chancery Division and Queen’s Counsel.

As of the early 21st century, top hats are still worn at some society events in the UK, notably at church weddings and racing meetings attended by members of the royal family, such as Royal Ascot. They remain part of the formal uniform of certain British institutions, such as the boy-choristers of King’s College Choir. They are usually worn with morning dress or white tie, in dressage, and as part of servants’ or doormen’s livery.

The top hat was frequently associated with the upper class, and was used by satirists and social critics as a symbol of capitalism or the world of business. The use of the top hat persisted in politics and international diplomacy for many years, including at U.S. presidential inaugurations, the last being worn at the inauguration of John Fitzgerald Kennedy in 1961. The top hat also forms part of the traditional dress of Uncle Sam, a symbol of the United States, generally striped in red, white and blue. 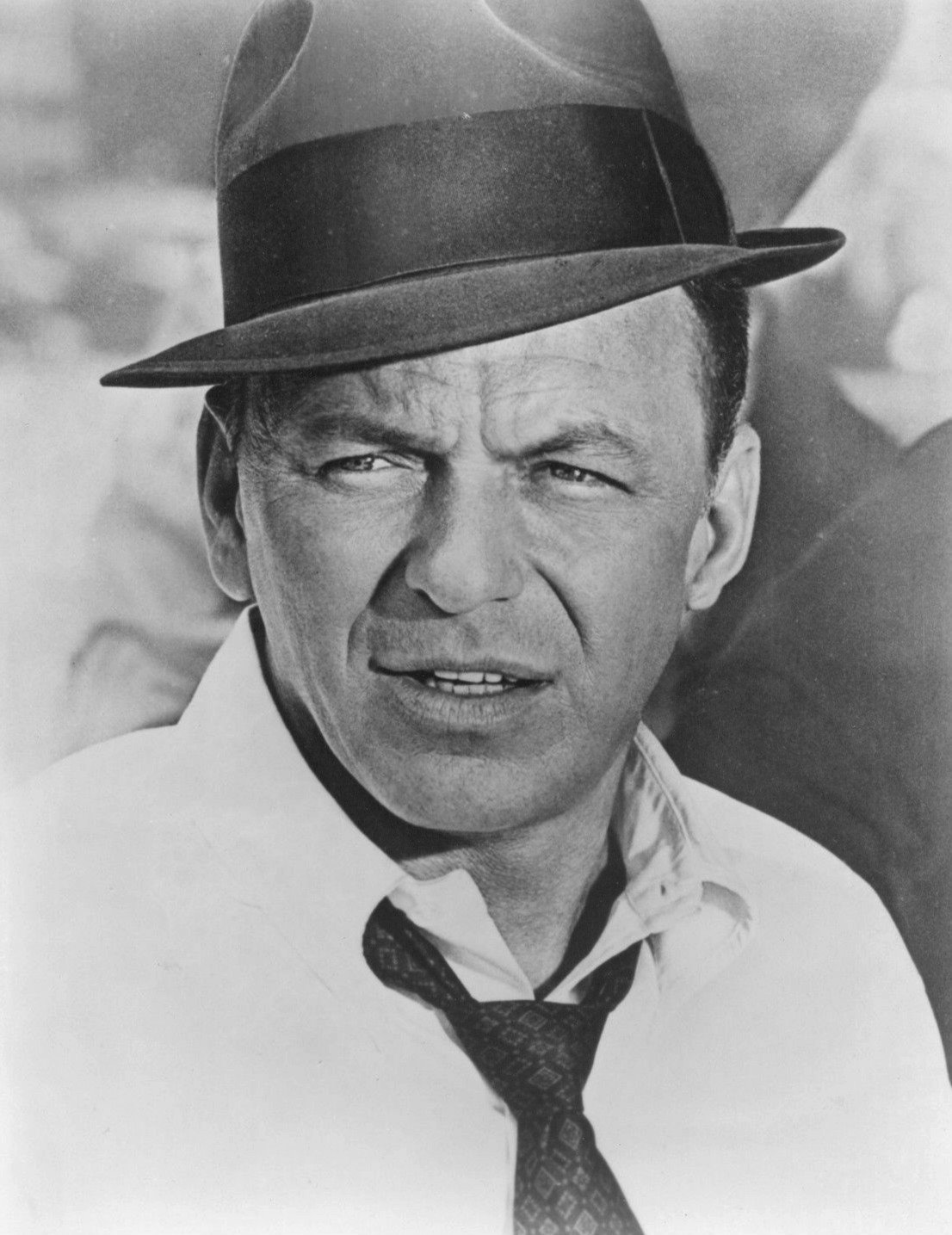 A fedora is a hat with a soft brim and indented crown. It is typically creased lengthwise down the crown and “pinched” near the front on both sides. Fedoras can also be creased with teardrop crowns, diamond crowns, center dents, and others, and the positioning of pinches can vary. The typical crown height is 4.5 inches (11 cm).

The fedora hat’s brim is usually wide, approximately 2.5 inches (6.4 cm) wide, but may be wider, can be left “raw edged” (left as cut), finished with a sewn overwelt or underwelt, or bound with a trim-ribbon. “Stitched edge” means that there is one, two or more rows of stitching radiating inward toward the crown. The “Cavanagh Edge” is a welted edge with invisible stitching to hold it in place and is a very expensive treatment that can no longer be performed by modern hat factories. Fedora hats are not to be confused with small brimmed hats called trilbies.

The term fedora was in use as early as 1891. Its popularity soared, and eventually it eclipsed the similar-looking homburg. Famous wearers of the Fedora hat were Al Capone, Humphrey Bogart and Frank Sinatra, just to mention a few. 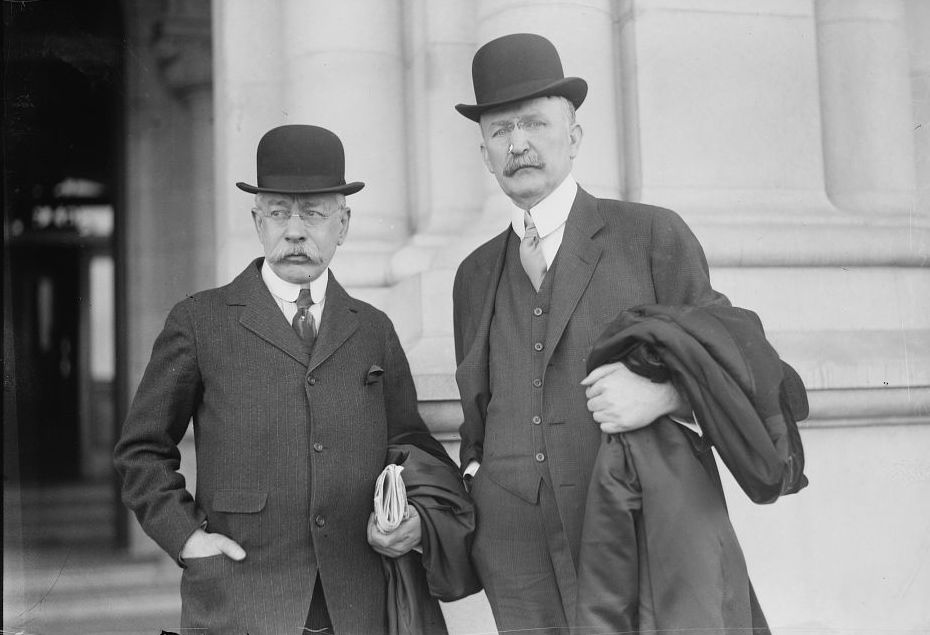 The bowler hat, also known as a derby in USA, is a hard felt hat with a rounded crown, originally created by the London hat-makers Thomas and William Bowler in 1849. It has traditionally been worn with semi-formal and informal attire. The bowler, a protective and durable hat style, was popular with the British, Irish, and American working classes during the second half of the 19th century, and later with the middle and upper classes in the United Kingdom, Ireland, and the east coast United States.

A homburg is a semi-formal hat of stiff felt, characterized by a single dent running down the center of the crown (called a “gutter crown”), a grosgrain hatband, a stiff brim shaped in a “kettle curl”, and a bound edge brim trim. It is usually offered in dark colours, although lighter grey variations exist. The original homburg was of slightly more generous proportions than often seen in 21st-century versions.

The name originates from Bad Homburg in Hesse, Germany, from where it was popularised in the late 19th century. The Homburg was popularised in the 1890s by Edward VII after he visited Bad Homburg in Hesse, Germany, and brought back a hat of this style. Al Pacino gained some renewed fame for the homburg by wearing one in the film The Godfather, for which reason the hat has sometimes been called a “Godfather”.

A trilby is a narrow-brimmed type of hat. The trilby was once viewed as the rich man’s favored hat; it is sometimes called the “brown trilby” in Britain and was frequently seen at the horse races. The traditional London hat company Lock and Co. describes the trilby as having a “shorter brim which is angled down at the front and slightly turned up at the back” versus the fedora’s “wider brim which is more level”. The trilby also has a slightly shorter crown than a typical fedora design.

The hat’s name comes from the stage adaptation of George du Maurier’s 1894 novel Trilby. A hat of this style was worn in the first London production of the play, and promptly came to be called “a Trilbyhat”.