To celebrate the fiftieth birthday of its enigmatic Golden Ellipse, Patek Philippe enlisted the help of several of its rare handcrafts specialists to create a limited edition series of 100 anniversary sets, each consisting of a platinum watch and matching cuff links. The manufacture also extended its regular collection by a new grand-taille model in rose gold with a black dial. This is a truly fitting homage to a sleek, expressive, and essential design concept.

After the Calatrava (1932), the Golden Ellipse is the second oldest watch in the Patek Philippe collection. It also exhibits one of the manufacture’s most symbolic designs as a legendary cult model that has survived five centuries of constantly changing fashion trends and signs of the times. When it was launched in 1968, it was hailed as a unique combination of sleek audacity and harmony. The bold elliptical case – a cross between a circle and a rectangle – featured a blue-gold dial with a mysteriously deep shimmer. Its balanced proportions were inspired by the “golden section” (the so-called divine proportion based on the ratio of 1 : 1.6181…). Since it was discovered by mathematicians in ancient Greece, it has been the formula on which numerous architectural and artistic masterpieces have been based.

In the 1970s and 1980s, the Golden Ellipse was vastly successful and established itself not only as a Patek Philippe icon but also as an internationally recognized symbol of style and class. In the late 1970s, the watch was available in 65 different versions. Its unmistakable shape was leveraged in many models of different sizes and in various precious metals. The ellipse was fused with other case shapes, including rectangular and octagonal forms, and even presented in a Nautilus Ellipse version. It came with leather straps or metal bracelets (braided, chained, milanaise), with various dial colors, applied hour markers or Roman numerals, and was also offered in jewelry as well as haute joaillerie versions for ladies. The famous ellipse design was even adopted for luxurious accessories such as cuff links, rings, and lighters.

The remarkably thin Golden Ellipse case, originally fitted with a manually wound movement, was first endowed with the legendary ultra-thin caliber 240 in 1977, automatically wound by a minirotor completely integrated in the movement. In 1993, Patek Philippe launched ladies’ models with strap lugs that echoed the case shape as elegant double ellipses. Then, with the Ref. 3738/100, the manufacture introduced a men’s model in three gold versions with differently colored dials (sunburst blue gold for the yellow-gold case, sunburst charcoal for the white-gold case, and sunburst chocolate brown for the rose-gold case). In 2008, Patek Philippe celebrated the 40th anniversary of the Golden Ellipse with a new version of the jumbo model (34 x 39.5 mm) which for the first time was crafted in platinum and with a sunburst blue gold dial (Ref. 5738P-001). On the occasion of the 50th anniversary, the collection welcomes two new versions of this legendary cult watch.

Ref. 5738/50P-001 Golden Ellipse – A limited edition as a fusion of rare handcrafts with timeless elegance 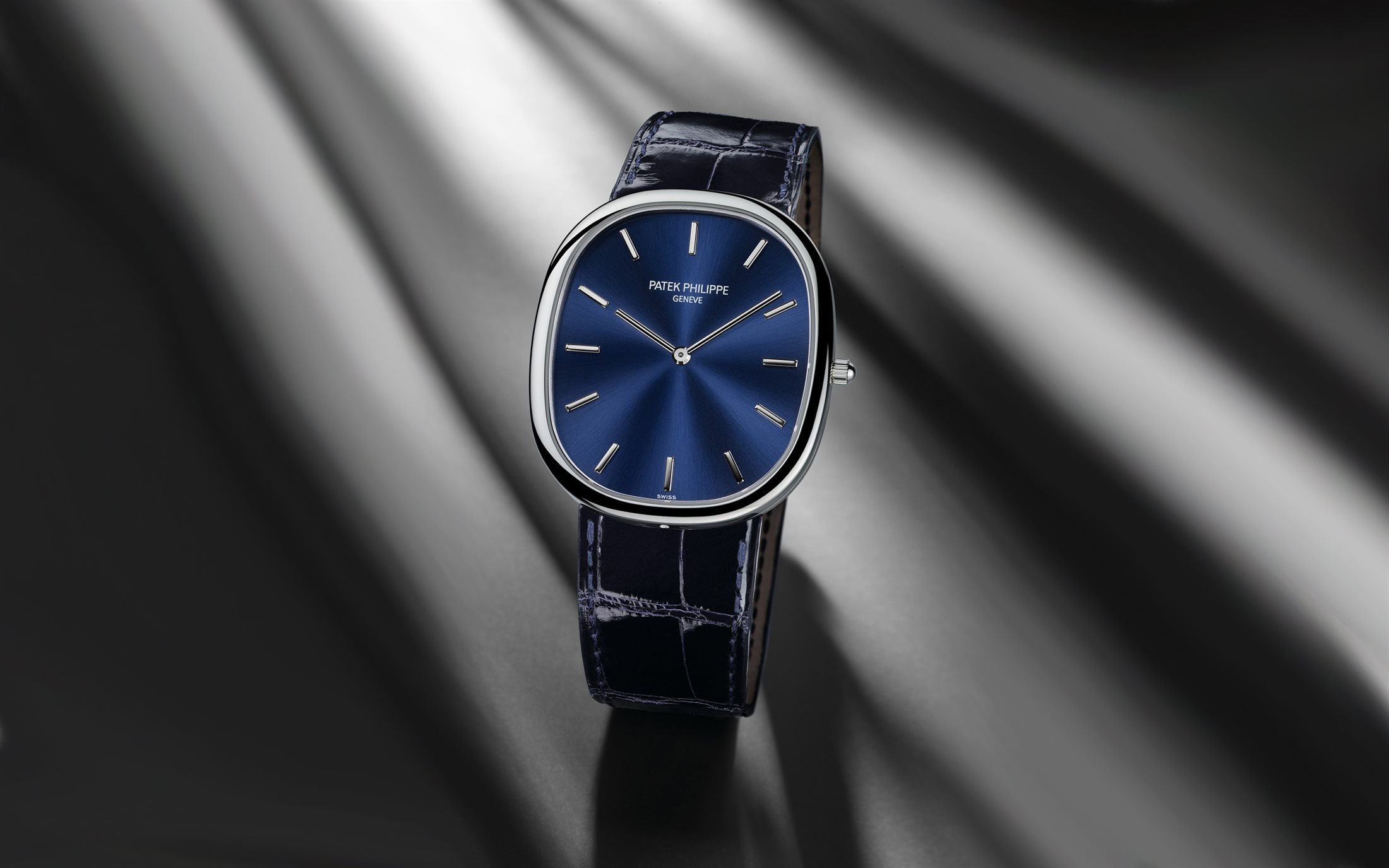 As the guardian of grand Genevan traditions, Patek Philippe is committed to the preservation of all artisanal skills that for over four hundred years have been used for decorating timepieces, including engraving and enamel arts. The manufacture picked two of these venerable forms of craftsmanship for a 100-watch limited edition that pays tribute to the 50th anniversary of the Golden Ellipse. 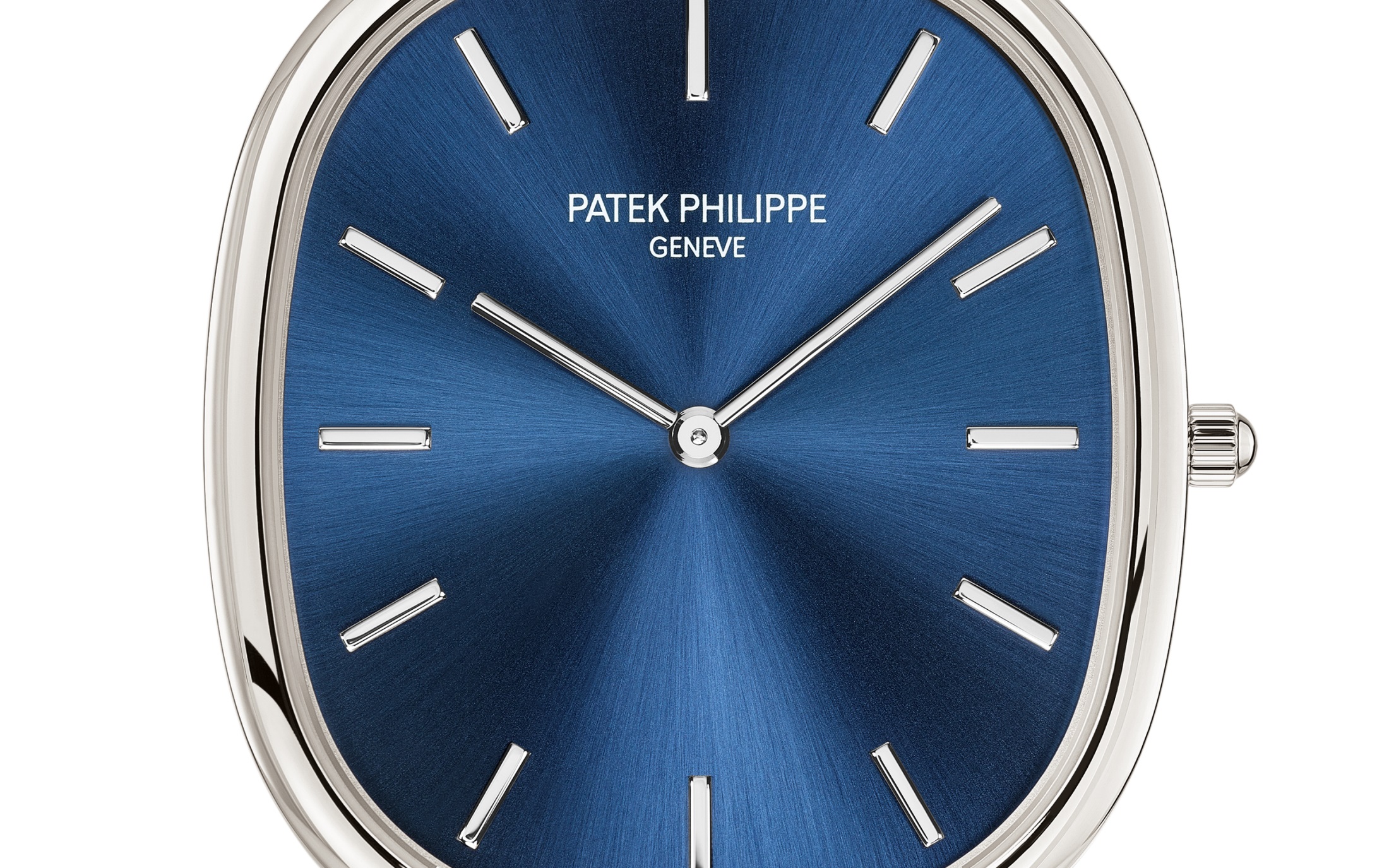 The dial of the Ref. 5738/50P-001 stands out with its black enamel primer as the background for the volute pattern manually engraved in the 18K white-gold plate. The center features a motif reminiscent of the Calatrava cross, Patek Philippe’s logo. This elaborate decoration is the result of many hours of work by a master engraver. It perfectly blends in with the unmistakably bold contours of the Golden Ellipse and emphasizes the harmony of the golden section. The passage of hours and minutes is tracked with delicate cheveu hands in satin-finished white gold. The case back in solid platinum is decorated with the commemorative engraving “Ellipse d’Or 1968–2018”. The crown is set with an onyx cabochon with the same color as the black enamel dial. And as all Patek Philippe platinum watches, the Ref. 5738/50P-001 features a diamond set in the caseband at 6 o’clock. 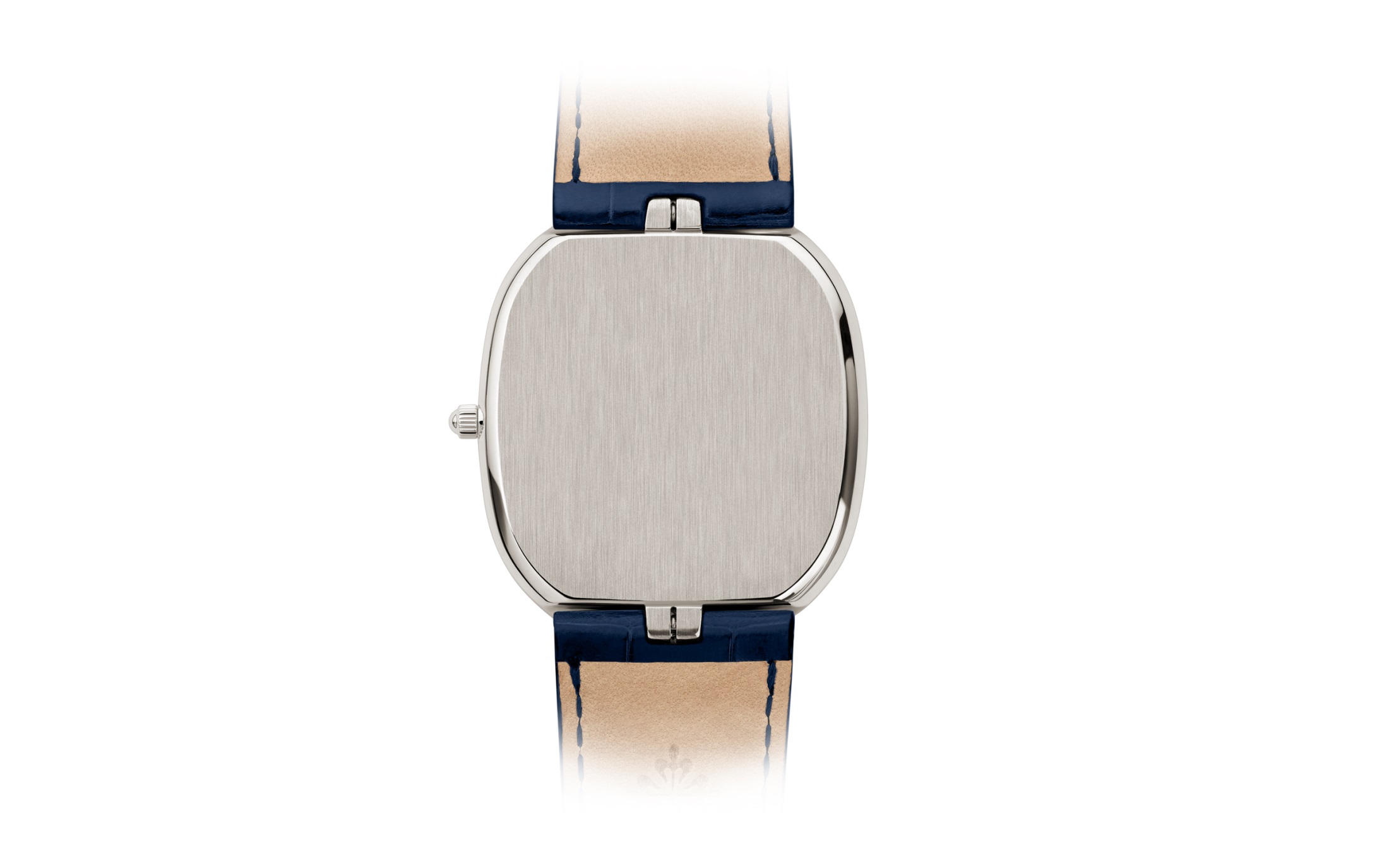 The artistically worked dial conceals the ultra-thin self-winding caliber 240 movement, which is why the silhouette of the case is so svelte. Its timeless elegance is emphasized by a shiny black hand-stitched alligator strap with square scales and a platinum prong buckle that echoes the shape of the elliptical case.

The limited-edition watch comes in a box with white-gold cuff links featuring in the exclusive Golden Ellipse design: the black enamel inlay showcases hand-engraved volutes around a Calatrava cross. Following the grand-taille model in platinum, launched in 2008 to celebrate the 40th anniversary of the Golden Ellipse, Patek Philippe is now presenting the iconic design as a new grand-taille version in rose gold (34 x 39.5 mm). The Ref. 5738R-001 pairs the warm glow of the polished precious metal with an ebony black sunburst dial adorned with applied hour markers and delicate cheveu hands in rose gold. It is a dress watch that appeals to aesthetes and connoisseurs alike. A black onyx cabochon set in the winding crown rounds out the harmony of this timepiece. 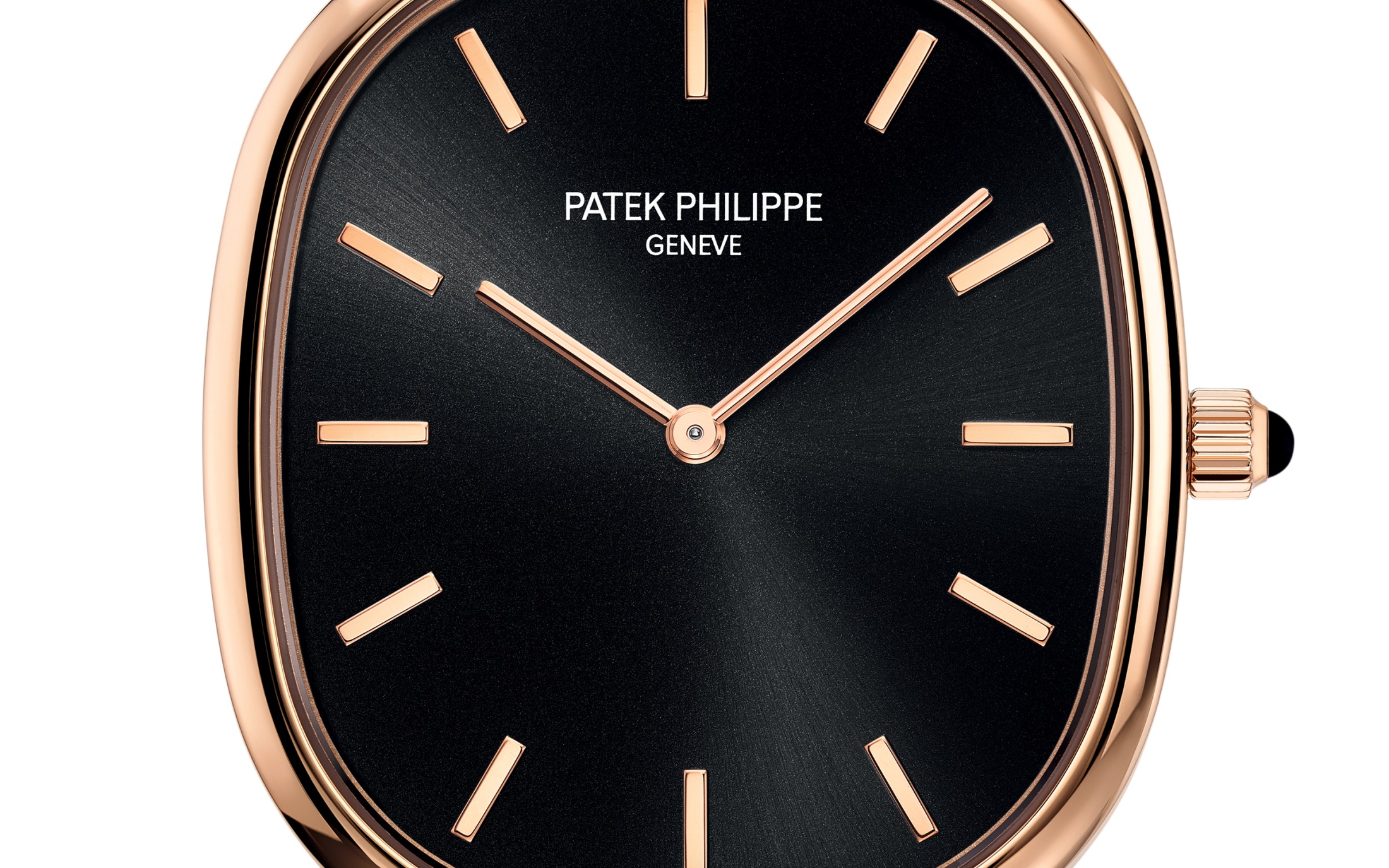 This masterpiece of balance and purity in form is powered by the self-winding caliber 240 movement with an off-center 22K gold minirotor completely recessed in the bridge plane. Accordingly, the case is very slender (height 5.9 mm), which emphasizes its timeless elegance. The watch is fitted with a solid rose-gold back. 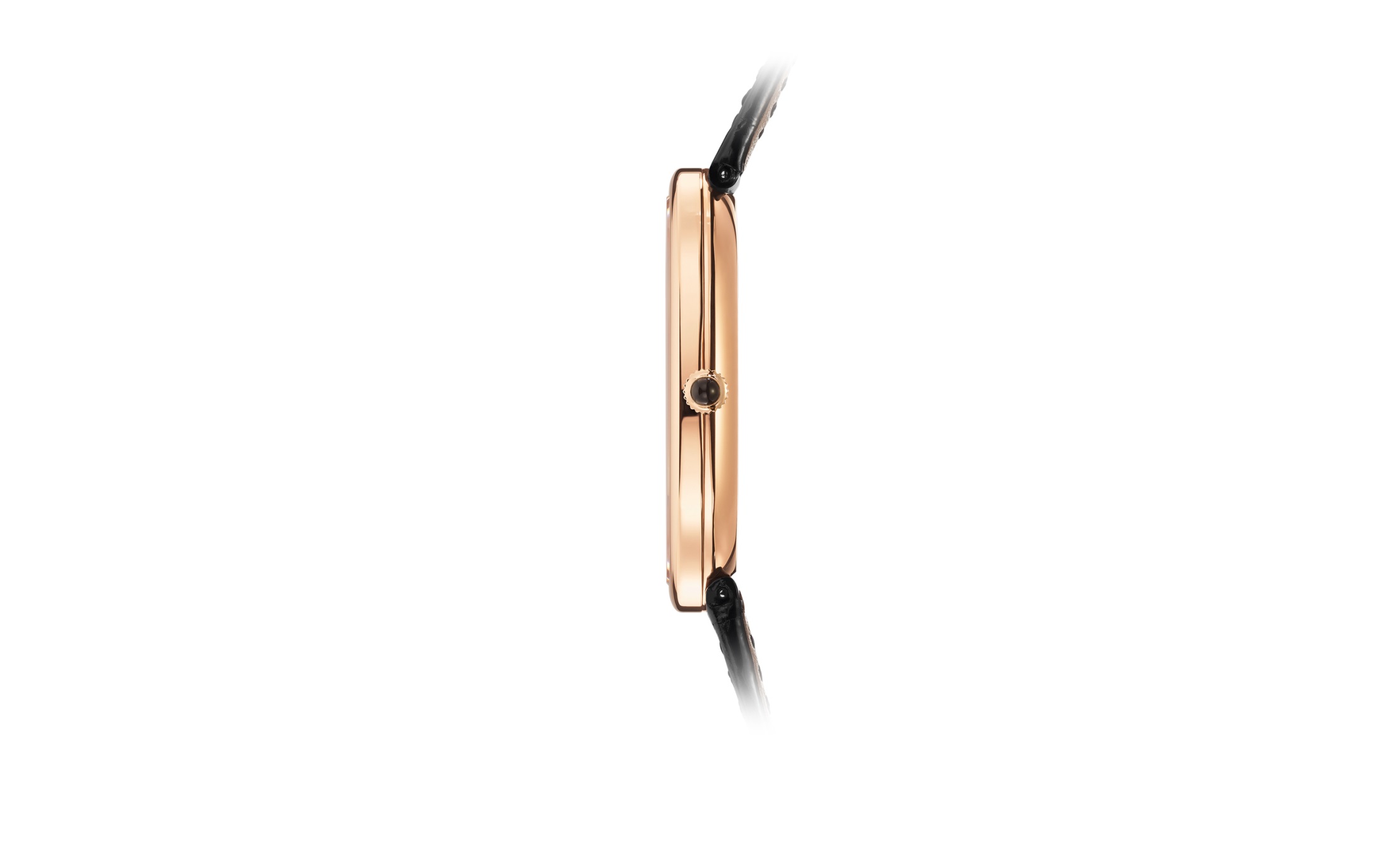 The refined, style-defining aspect is underscored by a hand-stitched shiny black alligator strap with square scales. Its rose-gold prong buckle echoes the shape of the characteristic case silhouette. As in the other Golden Ellipse models, the strap attachment is discreetly concealed beneath the caseband. Nothing distracts from the famous elliptical shape that celebrates its 50th anniversary.

Written By
The Gentleman
More from The Gentleman
There’s a big desire to dress stylishly in the summer of 2022...
Read More