As with fashion in general, a lot has happened over the years in the motorcycle riding gear. In the early days of motorcycle history, the equipment used by the motorcyclists wasn’t so different from the clothing used in other parts of life. But as the motorcycles developed and got faster, more suitable clothing had to be developed for the more versatile use of the vehicle as means of transportation.

These days we have a lot of specialized brands for motorcycle riders in MC-stores like XLmoto, but the situation was completely different in the beginning of the last century when the motorcycle was still something exotic and new on the roads.

The first commercial design for a self-propelled cycle was a three-wheel design called the Butler Petrol Cycle, conceived of Edward Butler in England in 1884. But it wasn’t until year 1894, when Hildebrand & Wolfmüller became the first series production motorcycle that we saw the first vehicle to be called a motorcycle.

In the early days of motorcycling it was an expensive activity and it was pursued almost only by men of means. It was a way of having fun, rather than a means of transportation. The etiquette rules dictated that a gentleman was presentable when he went out for a ride and since tweed suits were the standard wear for sports in the late-nineteenth century, so was it for motorcyclists.

As the motorcycles became faster in the early-twentieth century, the need for more protection was necessary. Riders began wearing gauntlet gloves together with full-length boots to provide some protection. The flat cap was also a new addition to the motorcycling wardrobe and was worn by for example police officers and couriers.

After World War I it was more common to use shorter jackets instead of the long duster coat that often got stuck in the wheels. Another common garment that was used while driving the motorcycle was the knickers – the knee length trousers that was used in various forms of other sporting activities in the first part of the 20th century.

In the 1920’s competition motorcycling became popular thanks to improvements in reliability in the motorcycle. The racers most often wore a competition sweater that was made of brightly colored wool.

The first step towards the motorcycle fashion that we have come to know today was taken when Irving Schott created the first leather jacket specifically for motorcycling in New York City in 1928. The jacket was made of thick leather and named after his favorite cigar, The Perfecto.

It was when Marlon Brando featured in the movie The Wild One 1953 that we got our first iconic garment in motorcycling. The Perfecto leather jacket from Schott that Marlon Brando used was the model 618 – a model that was introduced a couple of years earlier. It was identical to the model 613 that was launched in the late 1940’s, but without the stars on the epaulettes. The stars on the epaulettes and the snaps on the collar of Marlon Brando’s jacket were later added to the jacket especially for the movie.

This look with the black leather Perfecto jacket, blue jeans and engineer boots would go on to inspire generations of rebels, musicians and teens. The popularity and connection to The Wild One movie actually led to it being banned from sale in many districts of England and USA – something that also strengthened its image as a symbol of the rebellious youth.

Another iconic motorcycle riding garment is the waxed cotton jacket that J. Barbour & Sons developed in the 1930’s. While leather is good for protecting the skin, it didn’t help keep out the rain that the English motorcyclists were accustomed to. Barbour & Sons had been making hunting jackets since 1894 and this was the first waterproof wax-cotton jacket for motorcyclists when it was launched  in 1935. The jacket had four pockets, with a larger one upper left, specifically designed for maps. The competitor Belstaff launched its similar model Trialmaster in 1948 and these two jackets have been seen on famous bikers like Steve McQueen and Ewan McGregor during the years.

In 1964 Steve McQueen and the rest of the US team wore the original International biker suits from Barbour at the International Six Day Trial in East Germany and in 2015 Barbour launched The Steve McQueen Collection to honor the brands history with the iconic actor.

The one-piece racing leather suit that often can be seen on motorcyclists today, usually referred to as “racing leathers”, was first used by world champion motorcycle racer Geoff Duke in the 1950s. Duke had the suit made for the purposes of streamlining, not safety, and like the majority of the leathers used at the time, the suit was made from horsehide.

The leather vest that is popular among many motorcycle clubs was introduced in the 1960s, but apart from that we haven’t since seen many garments that could be classified as “iconic” in motorcycling. Companies like the mentioned Schott, Barbour and Belstaff have launched modern takes of their iconic jackets, but mostly the trend nowadays is towards more functional clothing for motorcyclists.

Most of the jackets, trousers and suits for motorcyclists that are made nowadays have protection embedded into the most vulnerable places on the body – on shoulders, elbows, knees, hips and the back. According to European law, protective clothing used by motorcyclists must have a CE marking to be approved.

Among the newest innovations are motorcycle jackets with airbags that are triggered in accidents, protecting the neck, torso and the lower back. 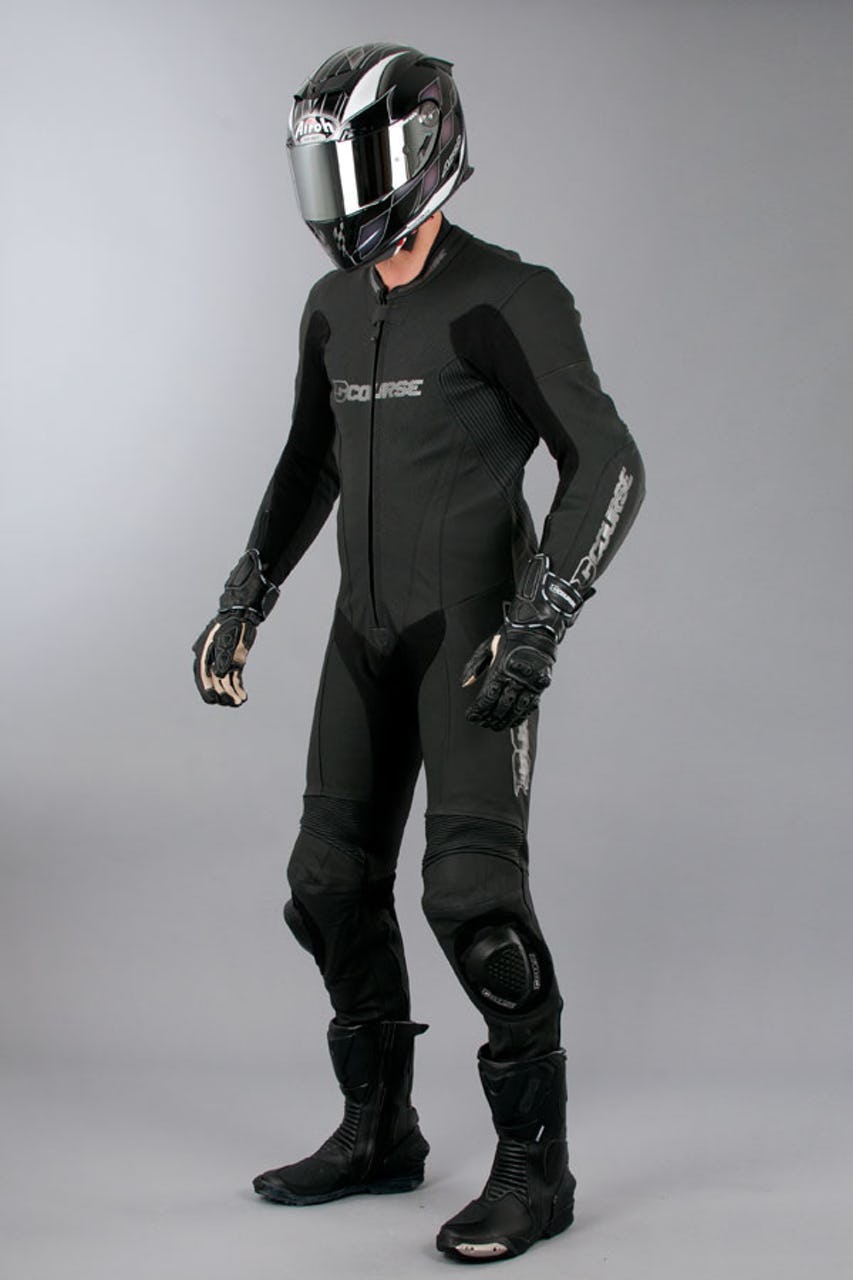 Here is an example of a modern leather suit for motorcyclists from the MC-store XLMoto, with strategically-placed stretch panels for mobility and CE approved shoulder, elbow and knee protection. The suit named Course Alpha Pro is ideal for days at the track and fast rides on the street.

A lot has happened in the motorcycle fashion over the last 100 years and the development continues. Considering how vulnerable the motorcyclists actually are in the traffic, this development is necessary. For the motorcyclist the clothes are more than just about fashion – it is also an investment that can save the life.

Written By
The Gentleman
More from The Gentleman
In the book Vintage Perfumes from 2015 by Jan Moran the fragrance...
Read More